Alvise Vivarini
Not on display

Mentioned by Boschini (1664) as being in the church of San Pietro Martire on Murano “to the left entering two little rooms”, and already “errant”, the two saints Matthew and John the Baptist were probably part of a polyptych whose parts had in all likelihood been incorporated within a Gothic frame (as is suggested by the trilobate outline in the upper portion of the panels) and that have since been cropped. The two paintings were brought back to their original appearance only after important restoration work was undertaken in 1949 by Mauro Pelliccioli, who removed heavy-handed repainting both over the background and the saints’ clothing. The two luminous lake landscapes in the background, for example, had been covered with tufts of grass and rocks to the right of Saint Matthew and a lamb’s head at the feet of John the Baptist. In the panel depicting Saint Matthew, the figure of an angel in the upper right hand portion was brought to light, while lower down there was even an arm of the blessing God the Father – a later addition, but nonetheless also covered up during the general repainting of the background. The restoration also revealed the letters “XDCXI”, probably a reference to the date of the repainting, on a rock at Saint Matthew’s feet. As further proof of the sorry state of conservation, a 4-centimetre strip running the length of the left hand side of the Saint John the Baptist panel was removed and then repositioned to the right in order to centre the figure of the saint. These additions and changes have led to doubts regarding how autograph the painting actually is and to difficulty in dating the two panels, which have now been referenced to Vivarini’s artistic production between the 1476 Montefiorentino polyptych (Urbino, Galleria Nazionale delle Marche) and the 1480 altarpiece originally in the church of San Francesco in Treviso and now at the Gallerie dell’Accademia. 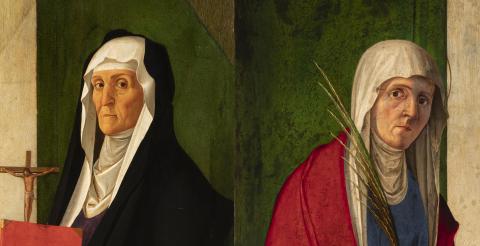 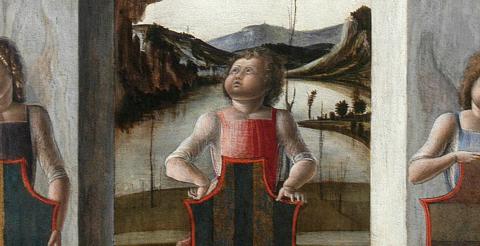 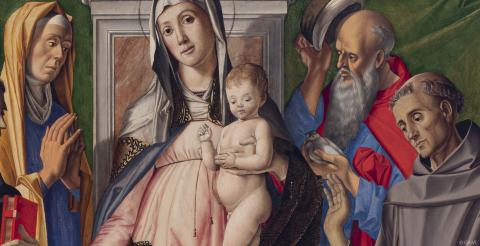 Madonna and Child Enthroned with Saints Louis of Toulouse, Anthony of Padua, Anne, Joachim, Francis, and Bernardino of Siena 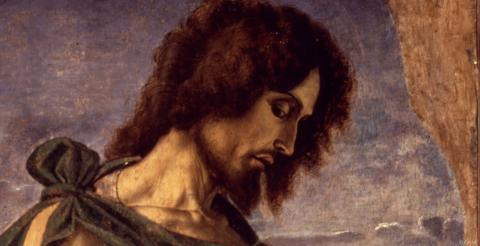