Madonna and Child and Saints Jerome and Francis

The panel is from the Magistrato del Sale ai Camerlenghi and may originally have been commissioned for private worship. Its horizontal format and subject matter, a type of sacra conversazione with half figures, were typical of this type of commission. The artist was much appreciated by the Venetian Republic and was commissioned for works such as the Madonna Enthroned with Saints Jerome and Francis and Two Magistrates for the Magistrati della Zecca (1486, Venice, Galleria Giorgio Franchetti, at the Ca’ d’Oro) and “three large standards” for Piazza San Marco (circa 1505). Although his early training was under Lazzaro Bastiani, this painting is clearly influenced by Giovanni Bellini. Compositionally, there are parallels with the Sacra conversazione Giovanelli (Venice, Gallerie dell’Accademia, cat. 881), which would suggest that it was painted towards the end of the first decade of the sixteenth century. However, Diana’s painting lacks the idyllic, soft moods of Bellini’s works and he uses a cooler palette, making his figures more realistic and his shadows more pronounced. His inspiration for this work is Lorenzo Lotto, whose handling of surfaces and physical features were very similar in his Sacra conversazione now at the Scottish National Gallery in Edinburgh (ca. 1505, cat. NG 2418). The crinkles and folds in the cloth become a kind of decorative motif, calling to mind the work of Jacopo de’ Barbari, who was himself heavily influenced by northern European painting. During this prolific and inspirational artistic period in Venice, Diana stood out among the minor artists for his ability to absorb influences from a variety of sources without compromising his own overall personal style. 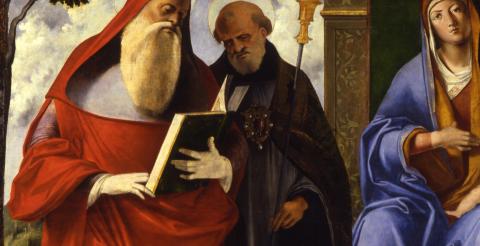