This painting entered the Gallerie dell’Accademia in 1821 and was attributed to Mattia Preti. It was later ascribed to Jusepe de Ribera, and only in 1958 did Roberto Longhi attribute it, with remarkable prescience, to the French Caravaggesque artist Valentin de Boulogne. Valentin was one of the most talented of the many Caravaggists working in Rome between the 1610s and 1630s and his highly original compositions were marked by a melancholic atmosphere and primarily focused on exploring the “emotions”. Experts generally agree that the extraordinary realism of the Martyrdom of Saint Bartholomew, as seen in the handling of the skin and flesh in microscopic detail, make it one of the French artist’s finest pieces and it is therefore dated somewhere in the 1610s. Although there are parallels with works by foreign Caravaggists who were active in Rome at the same time, the canvas is informed directly by Caravaggio’s work in Santa Maria del Popolo and by Guido Reni’s Caravaggesque experiments such as the Crucifixion of Saint Peter, now housed in the Pinacoteca Vaticana. However, it is doubtless that in this painting de Boulogne demonstrates an idiosyncratic and unique attention to detail and is clearly influenced by Caravaggio’s lucid realism. What is remarkable is the contrast between the raw brutality of the gruesomely flayed skin, the expression of pitiful resignation, and the concentration on the face of the skilful “butcher” as he goes about his task with apparent nonchalance. 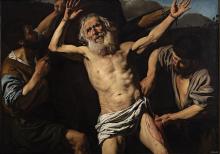 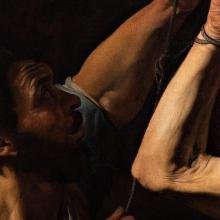 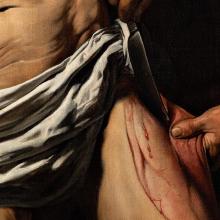 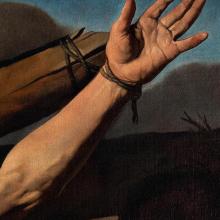