Giovanni Bellini was commissioned to execute this telero, or large canvas, in 1515. On his death the following year, the telero was assigned to Vittore Belliniano, who completed it in 1526. The scene depicts the martyrdom of the patron saint of Venice, who was dragged through the streets of Alexandria until he died. Oddly enough, the episode is consigned to the lower portion, to the right of the outline of the door, where the pool of blood comes to a stop. Large swathes of the painting are given over to the motley crowd, among whom there are the members of the Scuola di San Marco dressed in black. 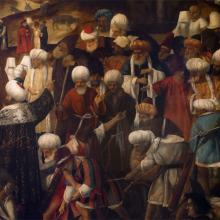 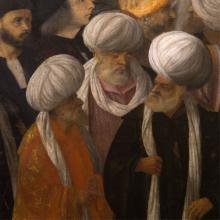 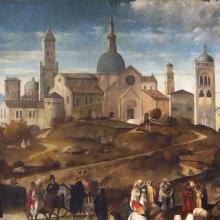