Saint Jerome and a Devotee

This small painting, which once belonged to count Bernardino Renier, came to the collections of the Gallerie dell’Accademia in 1850 when it was bequeathed by his wife Felicita Bertrand Helmann, according to her husband’s wishes. This is one of the rare works Piero della Francesca signed, as can be seen in the elegent upper-case script carved into the trunk holding up the crucifix (“PIETRI DE BU/ GO SCI/ SEP/ULCRI OPUS”). Saint Jerome, wearing a tunic tied at the waist by a belt of thorny twigs, seated on a rustic, solidly built stone bench, is depicted as he interrupts his reading on the arrival of a supplicant, who is the commissioner of the painting, Girolamo di Agostino Amadi, as can be seen from the (abbreviated) script in the lower portion of the painting. Even though they belong to two separate worlds and are separated by an entire millenium, the two characters are drawn together by the dialogue of their gazes which takes place in a suspended, motionless atmosphere. A sense of great solemnity is conferred by the scene with the insistent geometric rhythm given to the forms, such as the cylindrical trunk of the tree bearing the crucifix in the foreground, the basic construction of the bench the saint is seated on, the frequent recourse to verticle lines that articulate the depth of the different planes such as the oak tree, the crenellated tower of the castle farther back on the right, and the campaniles and towers of the little town. In this latter we have another reference, along with the hilly landscape, to Borgo Sansepolcro, the painter’s native town, often re-evoked in the backgrounds of his paintings. Just when the painting was executed in Piero della Francesca’s life has provoked great debate, even though it is generally agreed that it should be dated to the early 1460s, just after The Resurrection (Pinacoteca Comunale, Sansepolcro), which can be dated to about 1458–1459, with which there are several affinities in the relationship between the figures and hilly background. 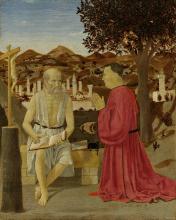 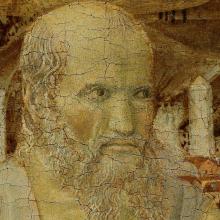 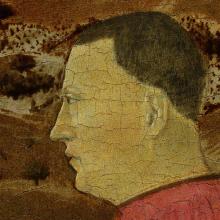 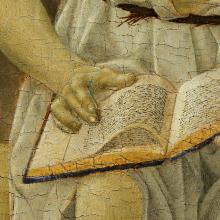 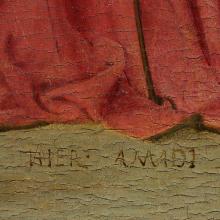