The painting is from the collection of Domenico Grimani (1461–1523), a prolific collector and art lover of the time. Between the seventeenth and eighteenth centuries the triptych was documented in manuscripts and archives in the Palazzo Ducale. Following the Austrian conquest of Venice, it was moved to Vienna in 1838, together with The Hermit Saints Triptych, which is now also housed in the Gallerie dell’Accademia. After World War I (1919), both of Bosch’s works were purchased by the state and registered as property of the Gallerie, although they were entrusted for storage to the Palazzo Ducale. The Saint Liberata Triptych has recently been restored revealing the quality of its craftsmanship and allowing for more in-depth analysis. Critics generally consider it to be by the master’s own hand and place it within the latter part of his career, around the turn of the sixteenth century. Restoration work revealed a faint layer of downy hair on the saint’s face, thus confirming her identity as Saint Wilgefortis (Virgo Fortis, or valiant maid), a martyr who was worshipped in Flanders but who is virtually unknown in Italy, where she goes by the name of Liberata. Although it is difficult to interpret the meaning of all the symbols in the painting, some of the key figures in her life can be recognised around the foot of the cross, including her father, to the right, who ordered her crucifixion as punishment for not marrying and for her Christian faith, and her betrothed, to the left, who is richly dressed and depicted falling backwards. The two side panels do not, at first glance, seem to bear any connection to the central panel. The one to the left shows a vision of hell and Saint Anthony Abbot while the one to the right depicts a seascape with a desolate, almost apocalyptic vision of death, as two figures in the foreground draw our attention back to the central panel. 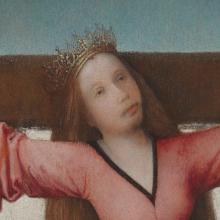 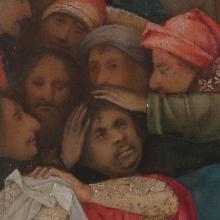 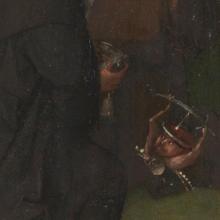 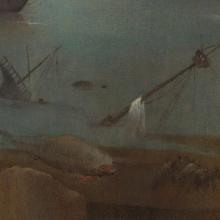 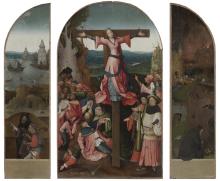 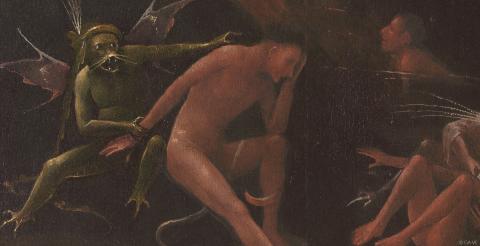 VISIONS OF THE HEREAFTER