Self-portrait as an Allegory of Wonder

Pietro Bellotti
Not on display

The figure in the portrait was identified and the painting dated thanks to the Venetian literary figure Giovan Giorgio Nicolini in Le ombre del pennello glorioso (1659), a sort of panegyric on the Lombard painter Pietro Bellotti: “He is a young man armed […] with an apple in his right hand and the staff of command in his left, looking steadfastly at the fruit with his lips tightly sealed and chin wrinkled as he arches his eyebrows and furrows his brow; altogether this expresses an excess of wondrous thoughts on his face”. It is a portrait of the artist as Wonder, although how exactly the symbols in the painting are to be interpreted is still a matter of some debate today, ranging from the esoteric to the playful. This is one of the most unique and evocative of the many works by Bellotti, who specialised in highly realistic half-figures in a vast array of expressions showing the range of different human emotions. The artist’s interest in this type of subject is confirmed by another self-portrait, this time shown as Laughter (Florence, The Uffizi), signed and dated 1658, possibly a companion piece to the work now housed in the Gallerie dell’Accademia. 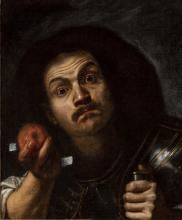