Virgin Enthroned and Child in the Heavenly Garden with the Doctors of the Church, Saints Augustine, Ambrose, Jerome, and Gregory

This polyptych was executed in 1446 for the sala dell’Albergo (boardroom) in the Scuola Grande della Carità and now hangs in Hall XXIV in the Gallerie dell’Accademia in Venice. It is undoubtedly the most complex and monumental of the works jointly undertaken by Antonio Vivarini and Giovanni d’Alemagna. Each piece was painted individually on canvas rather than a wood panel and the work originally hung in this same room but opposite Titian’s Presentation in the Temple. The original carved wooden frame was destroyed along with the altar in 1811, when a passageway was opened up to connect the two buildings, which were refurbished to modify the museum venue. The Virgin sits in a Gothic-inspired boxlike space on a sumptuous wooden throne beneath a baldachin held aloft by four angels, who in turn are flanked by Saints Jerome and Gregory on the plinth to the left and Saints Ambrose and Augustine to the right. While the traditional three-section format of the triptych is maintained, there is a cohesive spatial structure which is enclosed on three sides, and an ingenious horizontal continuum, perhaps determined by the space it was originally intended to hang in. The positioning of the saints and angels along the orthogonals reinforce the illusion of depth. Features such as these new insights into perspective, the softness of the flesh, and the use of vivid colour suggest that Vivarini was familiar with Donatello’s works in Padua and the work of other Tuscan artists active in Veneto, who paved the way for the unified-space altarpiece developed later by Andrea Mantegna and Giovanni Bellini. The altarpiece appears to reconcile two very different approaches – on the one hand Vivarini’s understanding of new stylistic trends, which seem to include the latest theories on space and perspective, while on the other the approach of his partner, Giovanni d’Alemagna, who tended more towards the Gothic style, evident in the elaborately decorated gilded throne that harks back to examples of northern European art. 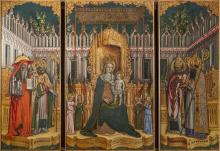 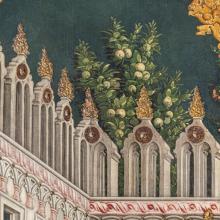 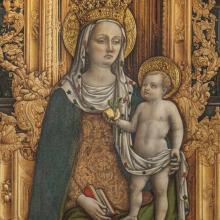 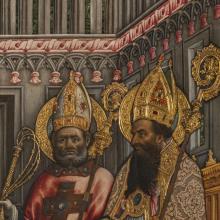