An opulently dressed woman is being visited by an angel bearing a skull, while Saint John the Evangelist, to the left, seems to be imparting instructions. In the middle ground, we can just make out Saint Joseph, who is holding a lily, and a non-identified female saint. Above, we have the apparition of the martyr Justina, who was perhaps responsible for the woman’s conversion or redemption. The canvas formed a pair with another work by the same painter depicting the doge Alvise I Mocenigo kneeling before Saint Justina, with a text alluding to the victorious battle of Lepanto against the Turks (1571). This was an ex voto, or an offering to God giving thanks for grace received or a promise that is to be kept. 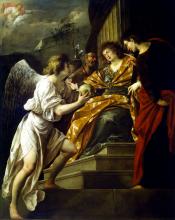