The Gallerie dell’Accademia di Venezia is staging an ambitious presentation of both retrospective and new works by Anish Kapoor, the British artist famed for probing the limits and materiality of the visible world through works that transcend their objecthood and invite wondrous and sustaining interaction. A further prestigious venue, the historic Palazzo Manfrin in the Cannaregio district, complements this presentation with another major selection of large-scale and genre-defying works.

Curated by art historian Taco Dibbits, Director of the Rijksmuseum in Amsterdam, this exhibition will reveal the full, visionary range of Kapoor’s practice, his painterly sensibilities and sculptural prowess. 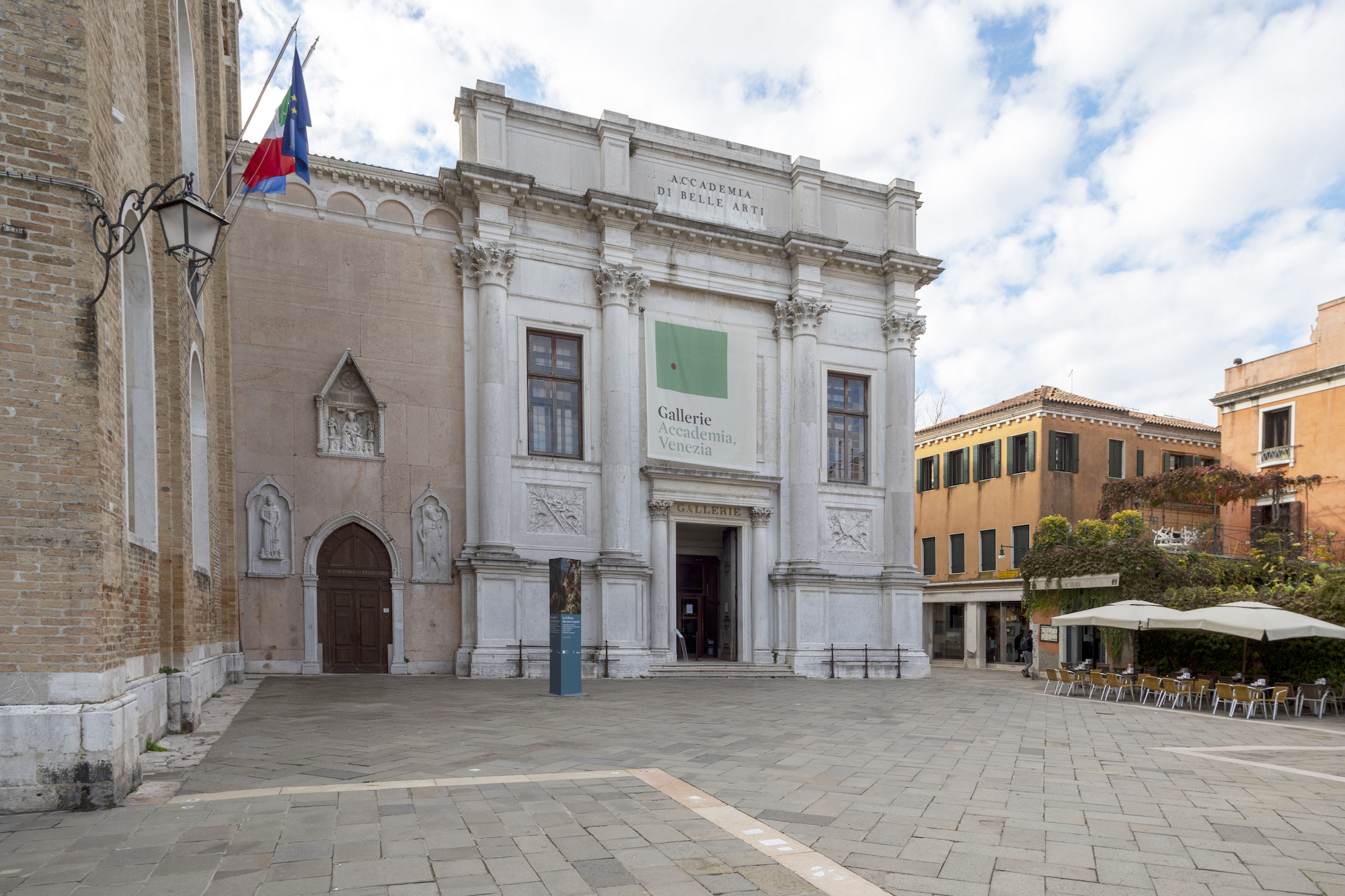 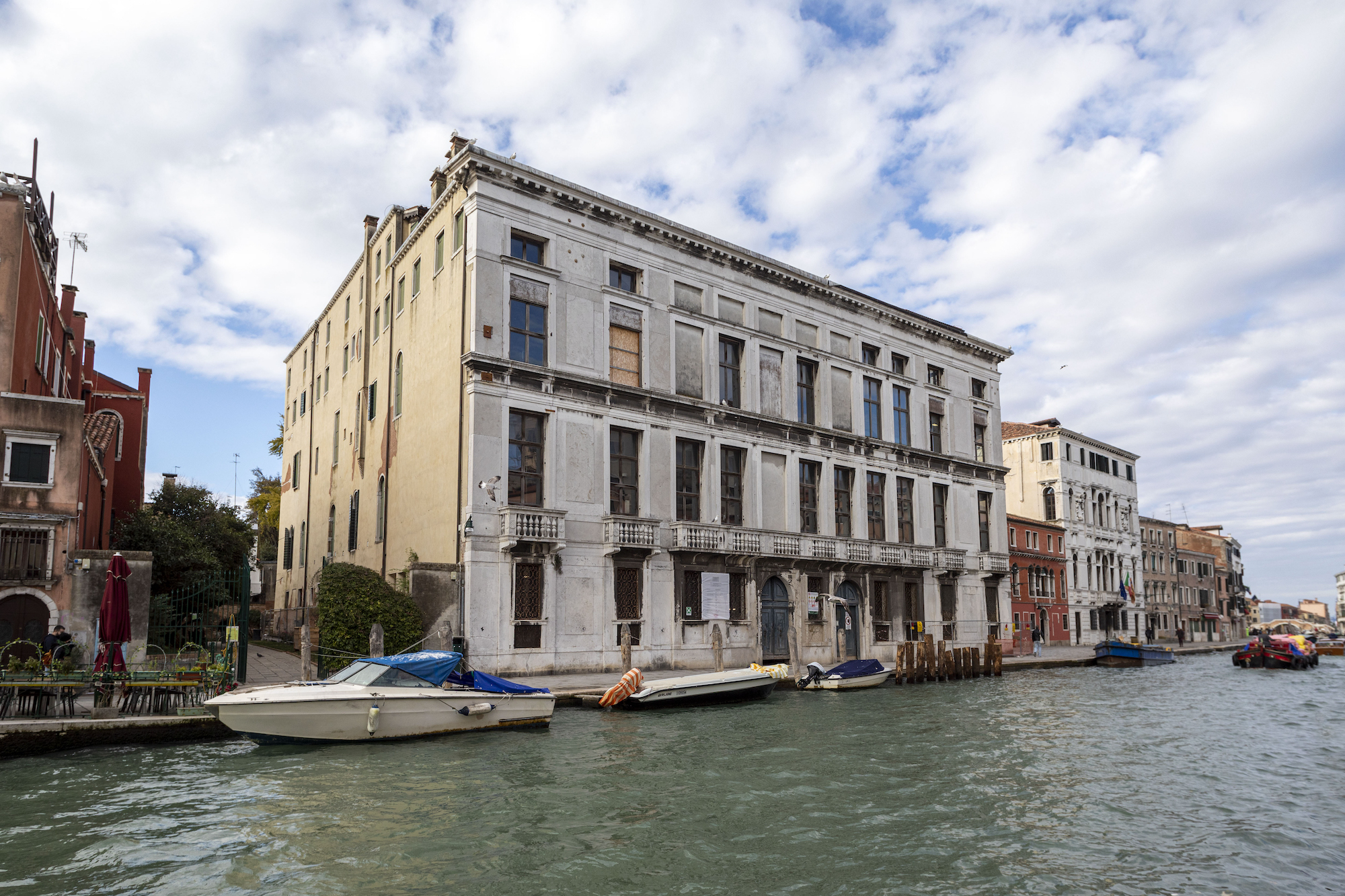 At the Gallerie dell’Accademia Anish Kapoor presents work from his seminal body of early pigment sculptures 1000 Names and void works – through to never-seen-before sculptures created with Vantablack a ground-breaking nano-technology material, a substance so dark that it absorbs more than 99.8% of visible light.

The skin of the object as veil between the inner and outer world has always been a potent presence in the artist’s practice, and here at the Gallerie dell’Accademia, sculptures made with Vantablack push this dynamic into radical new territory, in forms that both appear and disappear before our eyes. In these works Kapoor proposes that if the motif of the fold in Renaissance painting was a sign of being, in their obliteration of the contour and edge we are offered nothing less than the possibility to go beyond being.

More unknown forces emerge through a further series of mysterious black works, some embedded in the wall of the gallery, that further explore darkness as a physical and psychic reality. Alongside these works Kapoor’s most recent paintings are strongly debuted, setting up a dynamic dialogue with both the Gallerie’s art historical collection, and his own sculptural language.

The motif of the skin and the fold is further explored through the spectacular, site-specific Pregnant White Within Me (2022), a giant bulge that distends the architecture of the gallery, suggesting a re-drawing of the boundaries between body, building and being. Kapoor commits various sacrilegious acts of shooting at, or cutting into the Accademia’s hallowed walls, turning the very fabric of the gallery inside out. 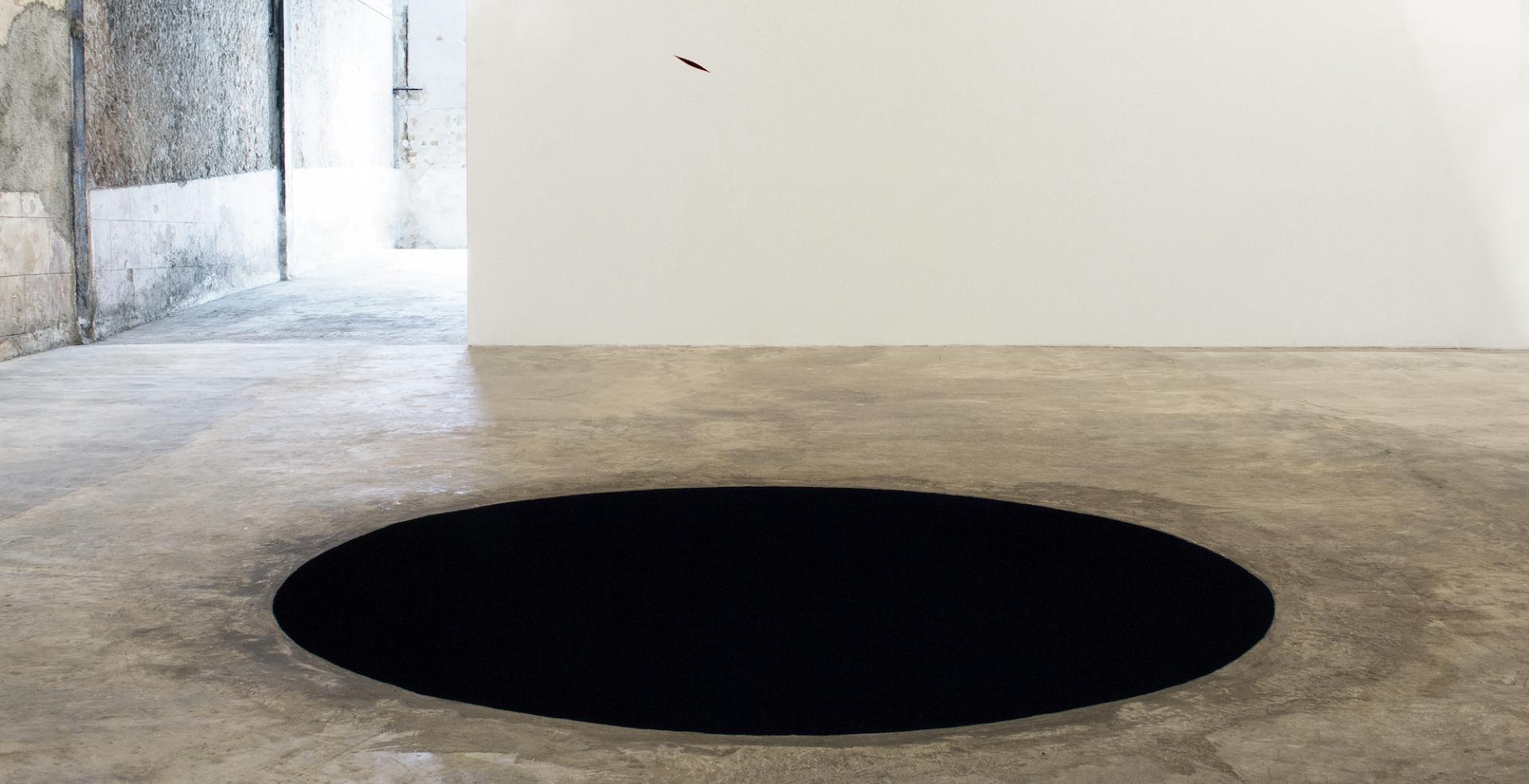 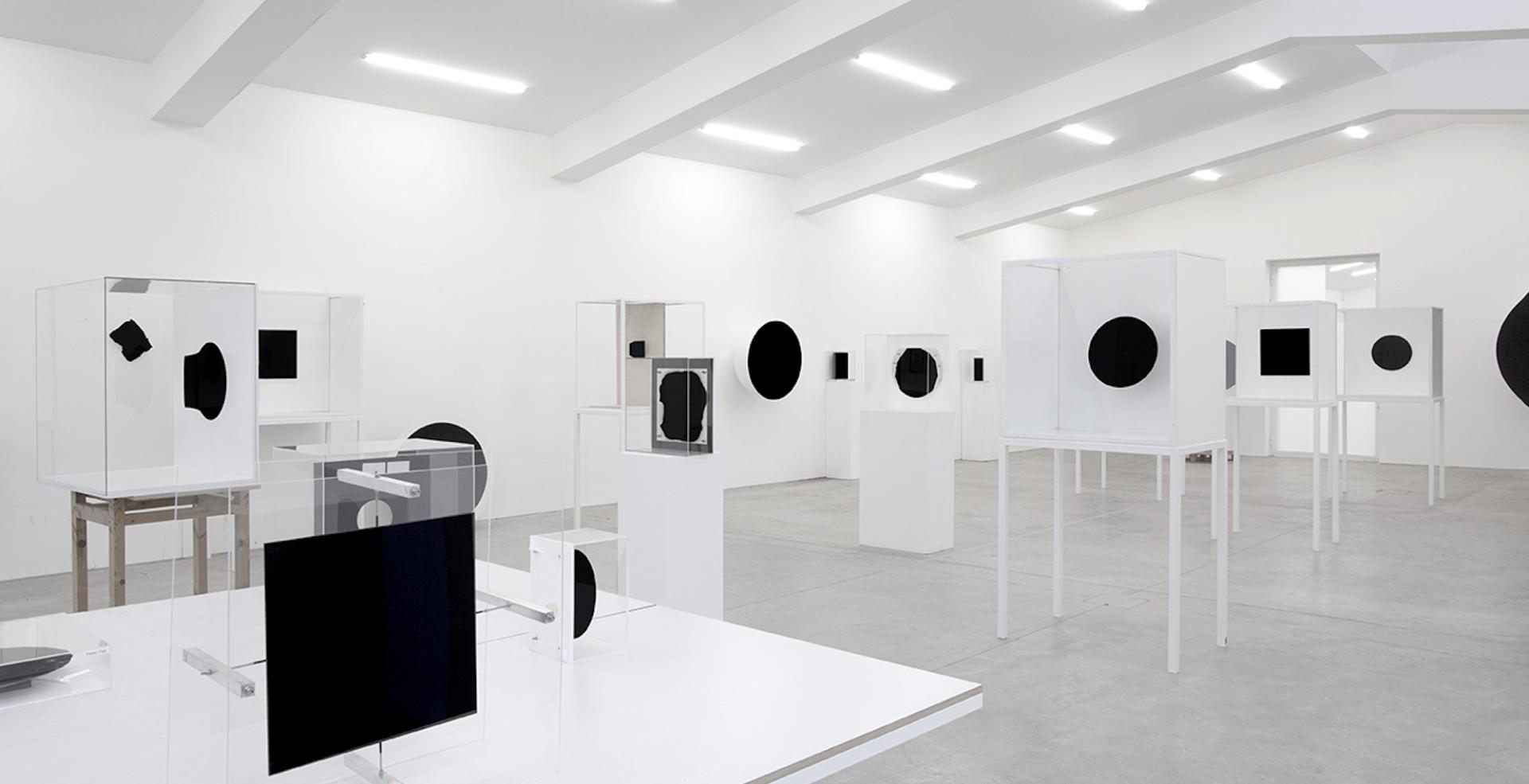 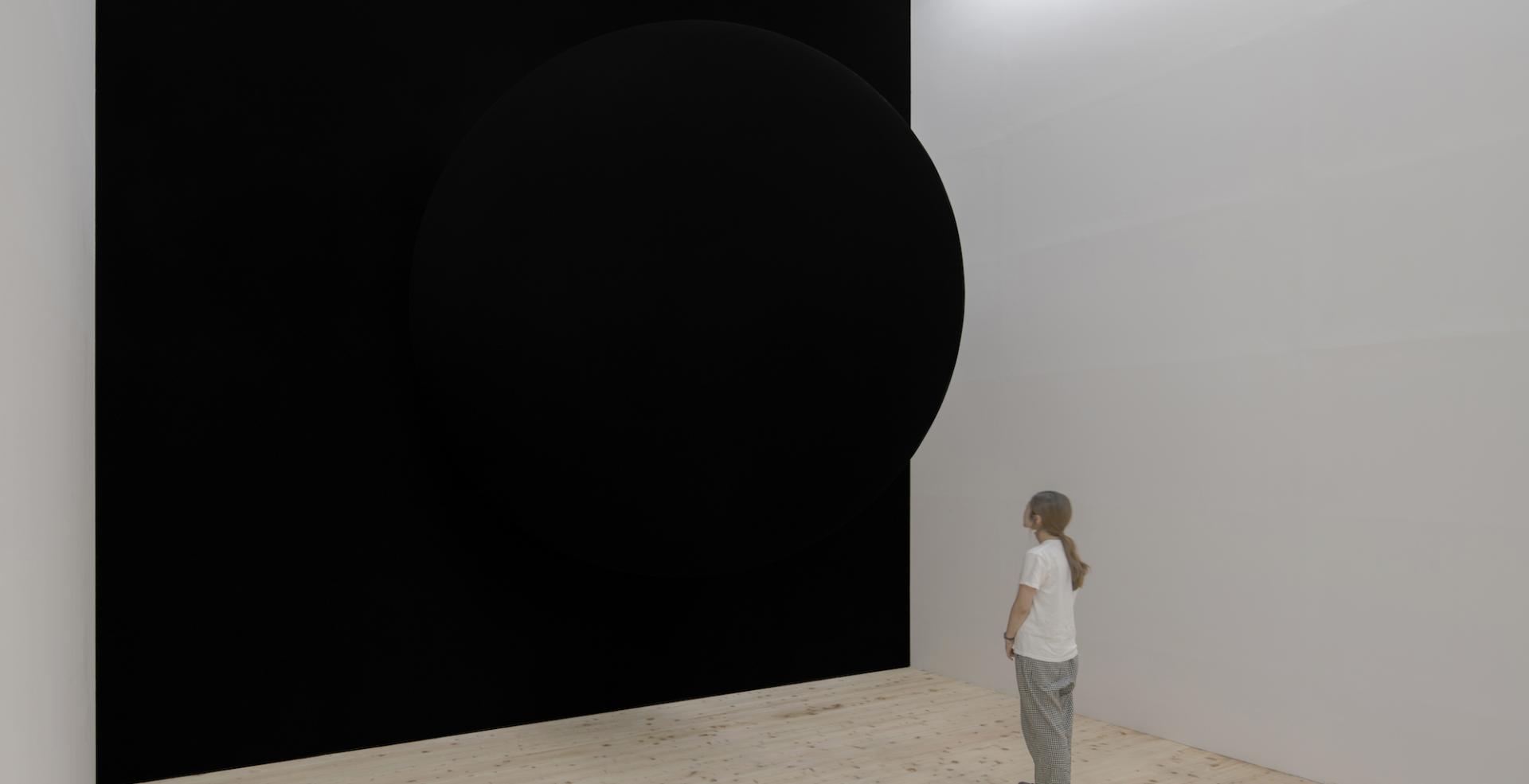 This second venue of Anish Kapoor’s dual exhibition begins with the monumental new work Mount Moriah at the Gate of the Ghetto (2022), protruding from the ceiling of the entrance hall and created specifically for the partially renovated spaces of Palazzo Manfrin. This pendulous mass of silicone and paint guides visitors through to an equally challenging set of rooms featuring a triptych of similarly seething, silicone paintings, Internal Objects in Three Parts (2013–2015), as well as many influential works from Kapoor’s long and prestigious career, including the iconic pigment work White Sand Red Millet Many Flowers (1982)

Further into the show, a series of mirror works flip and distort the viewer’s expectations of what is before us. Heaven, hell, earth and sea are all invoked, mixed and inverted in public-scale, mechanised works such as the spinning red waters of Turning Water Into Mirror, Blood Into Sky (2003) and Destierro (2017), in which a monochrome blue digger transports tonnes of red earth in an epic display of displacement. Colour for Kapoor is a condition, immersing the viewer in the weight of its saturation, allowing colour to enact its transformational potential. Subtleties of Venetian light are at play in ethereal, geometrical works carved from natural alabaster while the deep, lagoon blue pigment of Kapoor’s early void hemispheres provide moments of meditative respite.

Many more spaces connect back to themes at the Gallerie dell’Accademia, with spiritual moments and rites of passage expressed in Kapoor’s unique visual language. All roads lead to the central installation of a setting (or rising) sun, which hovers over a mass of spent red wax as it aggregates on the palazzo floor, submerging the historic venue in the primal stuff of life and death. 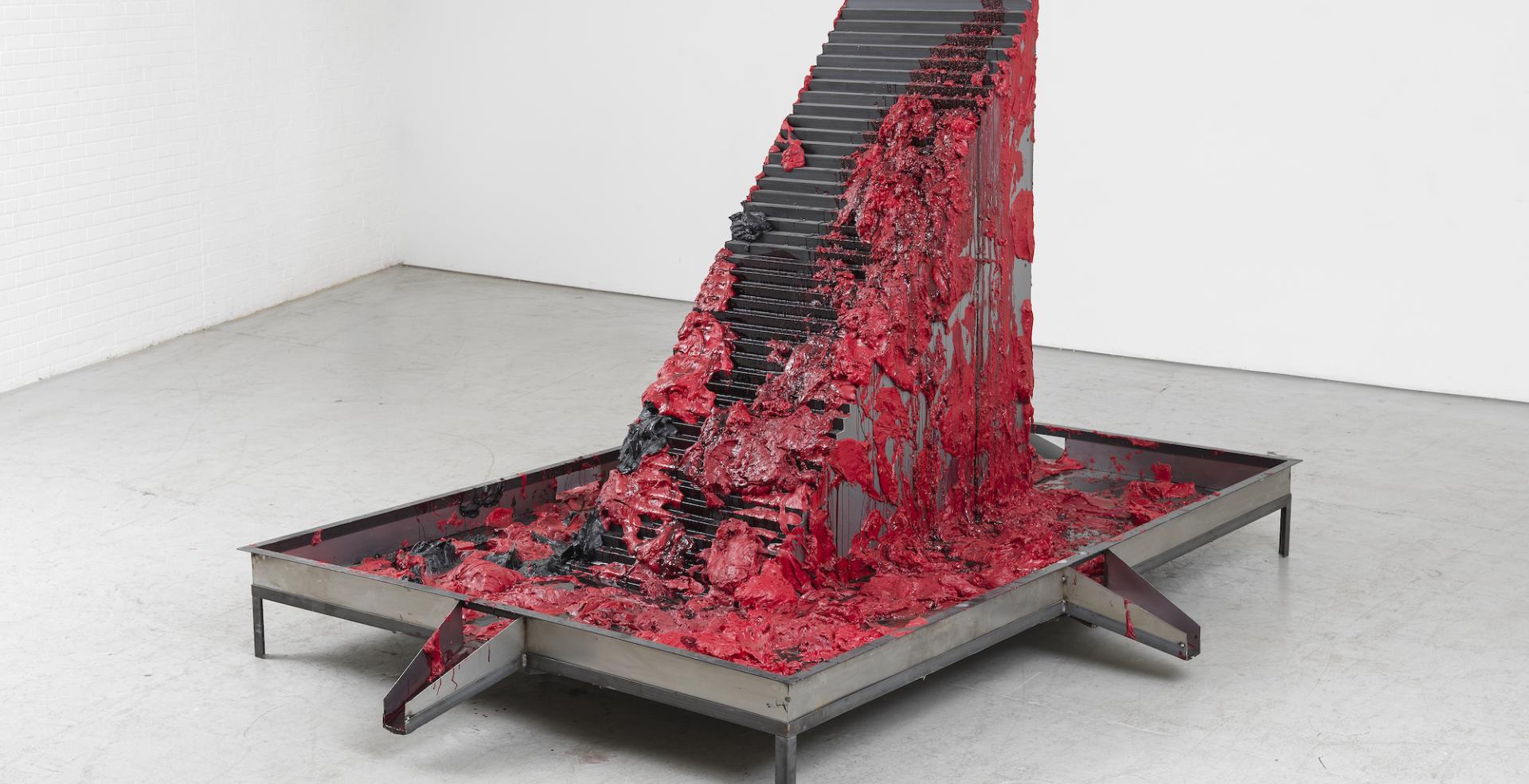 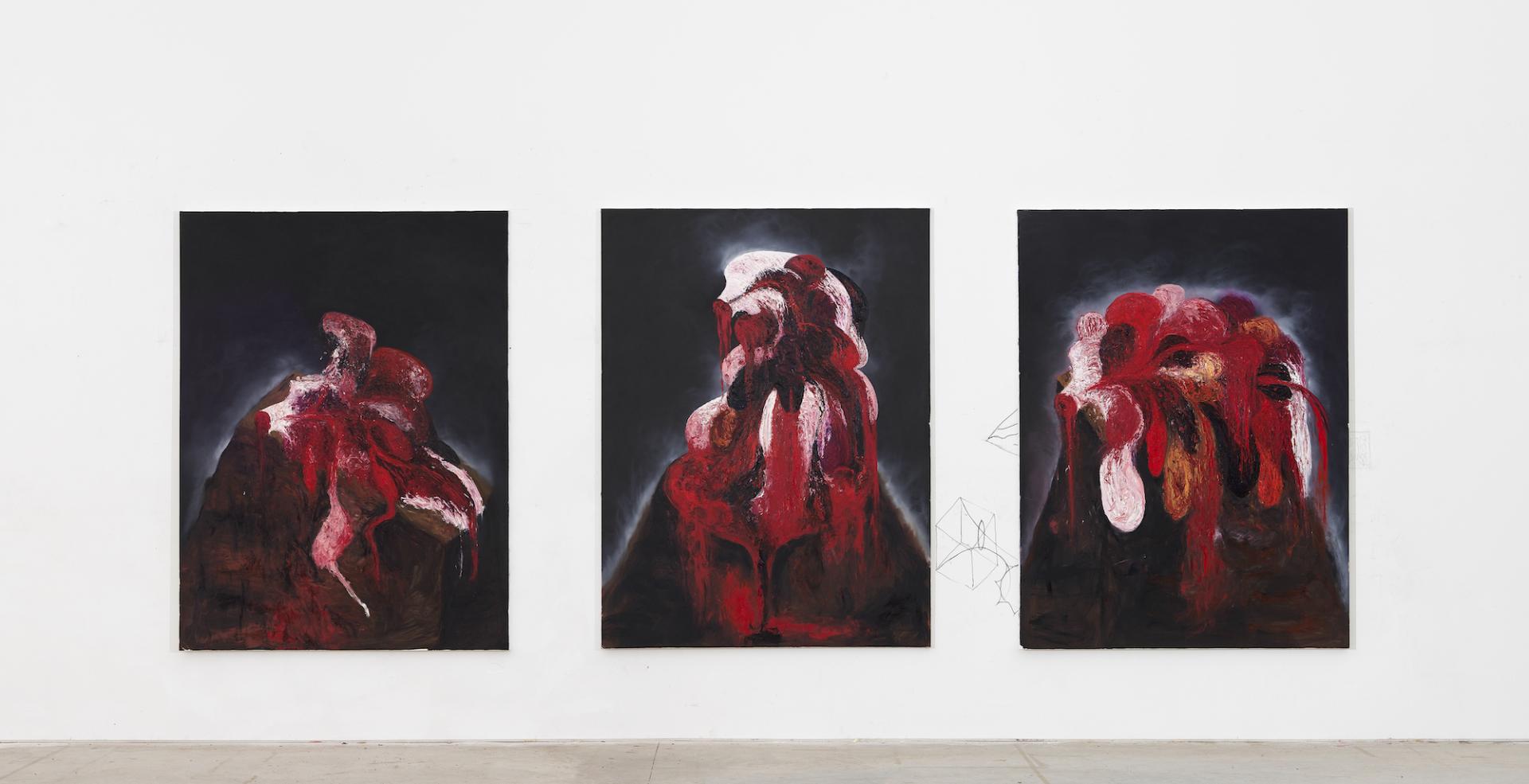 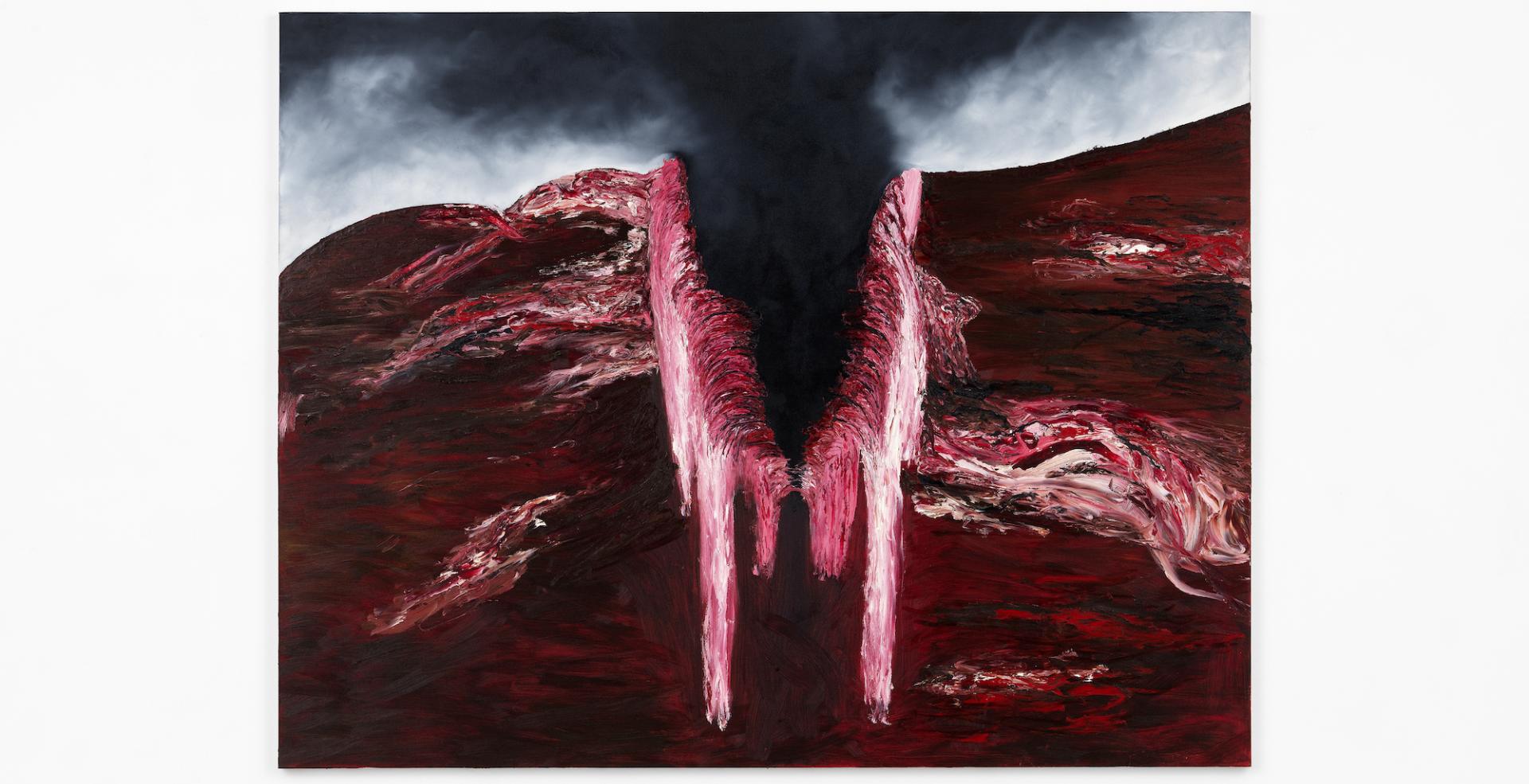 The exhibition has been organised in collaboration with Anish Kapoor Studio and Lisson Gallery, with support from Galleria Continua, Galerie Kamel Mennour, Galleria Massimo Minini, Kukje Gallery, Regen Projects and SCAI The Bathhouse. 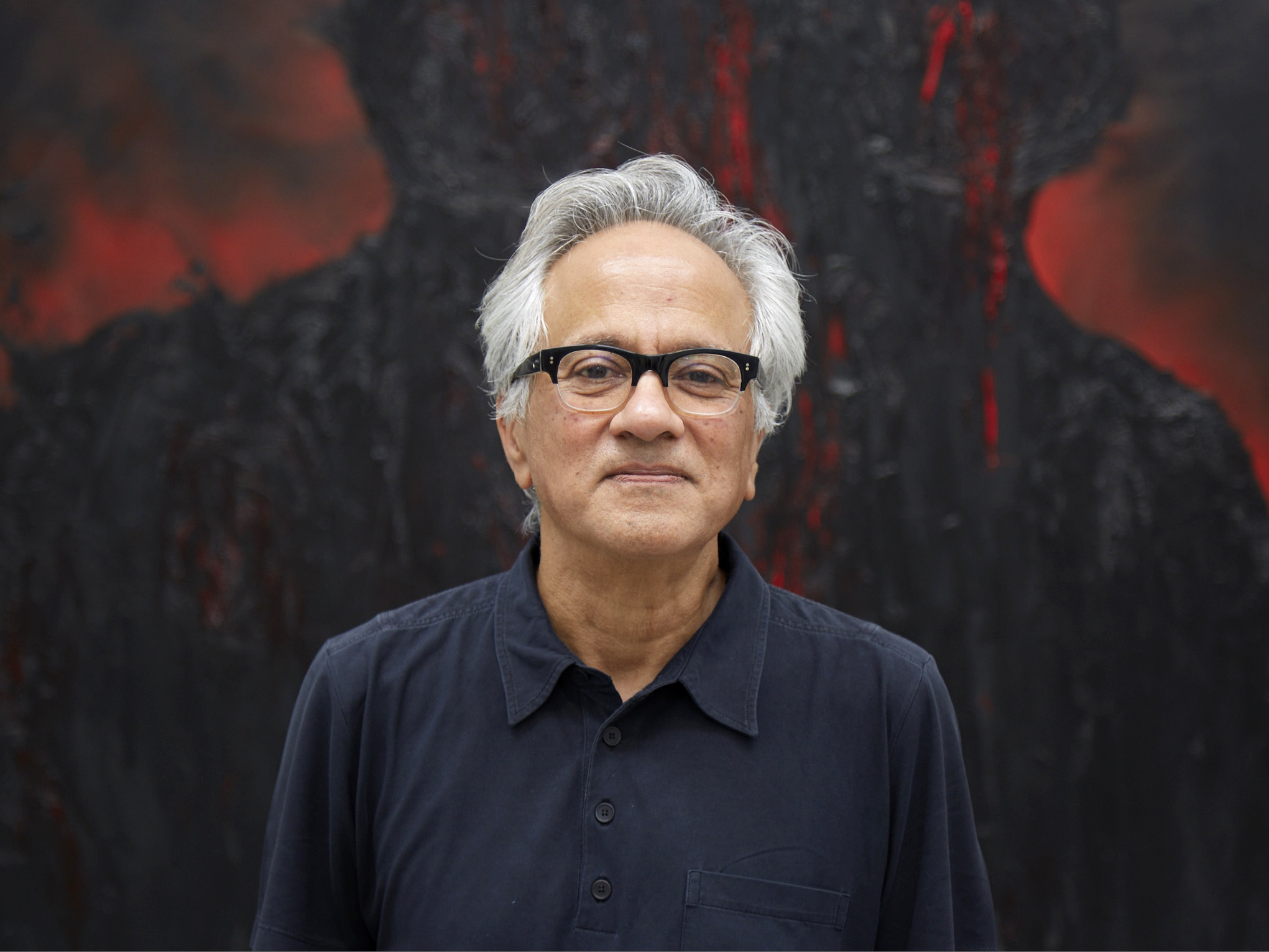 Anish Kapoor is considered to be one of the most influential artists working today. Born in Mumbai, India in 1954, he has lived and worked in London since studying sculpture at Hornsey and Chelsea College of Art in the mid-seventies. His works are permanently exhibited in the most important collections and museums around the world from the Museum of Modern Art in New York to the Tate in London; at the Prada Foundation in Milan; at the Guggenheim Museums in Venice, Bilbao and Abu Dhabi. Recent solo exhibitions have been held at Modern Art Oxford, UK (2021); Houghton Hall, Norfolk, UK (2020); Pinakothek der Moderne, Munich, Germany (2020); Central Academy of Fine Arts Museum and Imperial Ancestral Temple, Beijing, China (2019); Fundación Proa, Buenos Aires, Argentina (2019); Serralves, Museu de Arte Contemorânea, Porto, Portugal (2018); University Museum of Contemporary Art (MUAC), Mexico City, Mexico (2016); Château de Versailles, France (2015); Jewish Museum and Tolerance Center, Moscow, Russia (2015); Gropius Bau, Berlin, Germany (2013); Sakıp Sabancı Müzesi, Istanbul, Turkey (2013); Museum of Contemporary Art, Sydney, Australia (2012).

Anish Kapoor represented Great Britain at the 44th Venice Biennale in 1990 where he was awarded the Premio Duemila Prize. In 1991 he won the Turner Prize and has gone on to receive numerous international awards and honours.

Housed in the ancient architectural complex composed by Scuola Grande, the church and the convent of Santa Maria della Carità, and overlooking the Grand Canal in the Dorsoduro urban area of the Venetian historical centre, Gallerie dell’Accademia is home to the most important collection worldwide of Venetian painting from the fourteenth to eighteenth centuries. The museum was inaugurated on 10 August 1817 and presents masterpieces by great Italian masters, as well as international ones, including Bellini, Bosch, Canaletto, Carpaccio, Lotto, Tiepolo, Tintoretto, Titian, and Veronese.

The Anish Kapoor exhibition is part of the Gallerie dell’Accademia’s long-term programming focused on contemporary art, with previous survey shows dedicated to Mario Merz in 2015, to Philip Guston in 2017 and Georg Baselitz in 2019. This reflects the history of the museum, which was also an academy for the training of contemporary artists. It rises to the challenge to open up new opportunities for a dialogue between past and present.

Palazzo Manfrin was purchased in 1788 by Count Girolamo Manfrin, a wealthy tobacco merchant, who transformed the first floor of the building into an art gallery, as well as a home for collections of sculptures, books and prints. The gallery became a major tourist attraction in Venice, visited by Antonio Canova, Lord Byron, John Ruskin and Edouard Manet, among others. When the works of the collection were sold after the death of Manfrin, the Gallerie dell'Accademia was enriched by twenty-one paintings including major masterpieces such as La Tempesta and La Vecchia by Giorgione, San Giorgio by Andrea Mantegna and the Portrait of a Young Man by Hans Memling.

The Palazzo is set to become the Manfrin Project, a space that will become a vibrant and vital cultural hub for the city, and while renovations are still ongoing – entrusted to the architect Giulia Foscari (UNA / FWR Associati) – it is now playing host to the second instalment of Kapoor's Venetian exhibition.