Giovanni Girolamo Savoldo
Not on display

The painting depicts the meeting between the Archangel Gabriel and the Virgin Mary at the moment of the annunciation of the coming of Christ. The scene is set in an intimate space characterised by elements such as the books in the background, the minutely depicted lectern, and the vase of flowers that all help to create a domestic atmosphere. Gabriel is looking at the Virgin and pointing upwards to testify to the divine nature of the message he brings; the Virgin echoes by lowering her gaze as a sign of acceptance of her own future as the mother of Christ. The painting has only recently been brought to the attention of scholars, when Gilberto Ganzer found it in the parish church of Ghirano in 1983. It was in a parlous state, and the formal aspects were barely visible. Restoration allowed scholars to more easily identify the hand of Savoldo. What’s more, the painting had been resized by rolling up the edges of the canvas to make it fit into its new setting. Sansovino (1581) was the first to mention the work in the church of San Domenico di Castello in Venice, as is revealed by a note on the back of the canvas. It was reportedly undertaken for the chapel planned by Antonio Massa and whose decoration was finalised by his nephew, making it likely that the Annunciation was executed after 1538, the year of Massa’s death. The chapel was demolished in 1590, and the painting was stored at the Palazzo Ducale for a while before it was transferred to the church of Ghirano at the behest of count Cleandro di Prata. 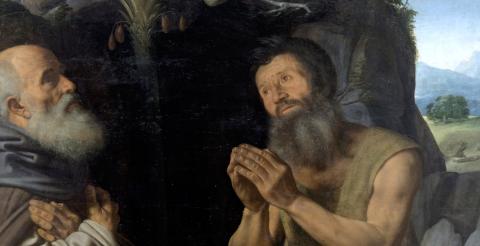