Giovanni Girolamo Savoldo
Not on display

In his Golden Legend, Jacobus da Varagine writes that Saint Anthony Abbot visited Paul the Hermit, who had been living as a hermit for forty years, fed by a raven who brought him bread every day. The painting, which depicts the meeting of the two hermit saints in a rocky nook where they are intent in prayer, is characterised by a skillful monumental structure and an extraordinary attention to detail, described through an oblique light. The work displays the artist’s ability to bring together the more modern elements of his time and presenting them through a new, personal language. Apart from the direct relationship with Dürer’s wood engravings (Valcanover 1983), and especially his 1512 Saint Jerome, there are also typically Lombard elements, such as the powerful plasticity, the isolated form of the towering figures that almost protrude beyond their support, the gravity and simplicity of the two saints, and the quiet, simple tones of the light that recall Foppa and Bergognone. When the heavily repainted surface was removed during the 1977 restoration, the formerly illegible marks were seen to be “1520”. 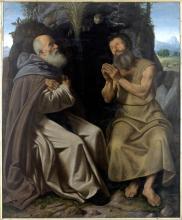 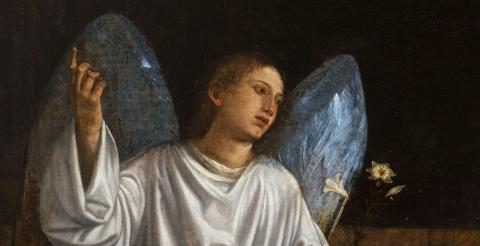