This work, which entered the museum collection in 1816 as part of the Molin bequest, was originally attributed to Caravaggio and later to Bartolomeo Manfredi. In a handwritten note cited by Moschini Marconi in 1970, Cantalamessa asserts that the work is by one of Caravaggio’s followers and Moschini Marconi, in the general catalogue of the Gallerie dell’Accademia, agrees, adding that the painting is not of a particularly high standard.

It shows three figures, elegantly dressed in keeping with seventeenth-century fashion, who are absorbed in a game of chess, a popular theme among Caravaggio’s followers who preferred genre scenes set in gloomy taverns.

The low viewpoint draws the eye along the sloping table, where there is a chessboard and the still life of a plate, a small carafe, and a glass. The chess players are bathed in a light that emphasises the texture of the vividly coloured cloth and makes their feathered headcoverings appear highly realistic against the indistinct darkened background.

The work is also interesting as it is evidence of the success (albeit rather limited) of Caravaggesque painting in Venice, examples of which were first documented with the arrival of painters from Rome in the 1620s such as Régnier, Gentileschi, and Vouet. 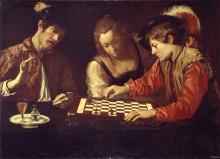 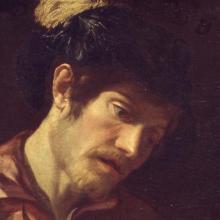 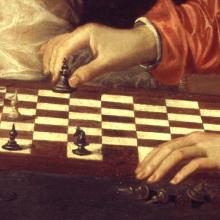 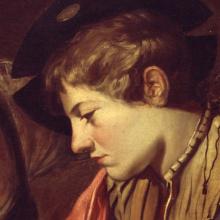