Andrea Previtali
Not on display

The painting came to the Gallerie at the end of the nineteenth century from the church of the Redentore along with an Adoration of the Child by the same author, with which it is paired because of the complementary subject matter, the similar style, and the absolutely identical support and size. As construction of the church of the Redentore did not begin until 1577, it is clear that this could not have been the place the original two paintings were intended for. One hypothesis that has yet to be tested is that they come from the small church of the so-called de’ Pregardi at the Palazzo Ducale. This hypothesis is supported by the provenance from the same church of two canvases that form a series with the above two, both in terms of style and size, that came to the Gallerie in 1947: Crossing the Red Sea with the submersion of the pharaoh and Christ in Limbo.The four canvases, to which should be added a fifth which is now in a private collection and depicts The Baptism of Christ, formed a coherent cycle on the sacramental theme of the Baptism from an eschatological point of view.

In the Crucifixion, Christ is centrally placed in a landscape that provides a setting for the drama. A gentle breeze from the right delicately blows through the leaves on a tree and disperses rain-heavy clouds, symbolic of the tragedy that has just taken place. Previtali pays particular attention to the elements of the landscape, which he studied from his youth, around 1500, and deriving from an intimate knowledge of Giovanni Bellini’s work.

Previtali presumably executed the canvases during a second sojourn in Venice after a youthful trip that took place before 1512. This second trip was probably undertaken around the mid-1520s during his collaboration with Lotto, who had returned to Venice for the inlay work for the choir of Santa Maria Maggiore in Bergamo. Another element that would confirm dating to the years 1525–1528 is the artist’s dramatic style, which was characteristic of his works in those years. 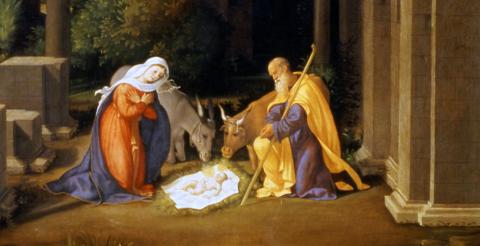