The panel is from the convent of Santa Maria dei Miracoli and has been attributed to Marco Basaiti based on its style. Its oblong format suggests that it was a predella, probably part of a larger work comprising several panels that may have included those portraying Saint James the Apostle and Saint Anthony Abbot, which came from the same location and are held by the Gallerie dell’Accademia. In all likelihood it belongs to the first period of his career, around the 1490s, as his treatment of the human form shows similarities with Alvise Vivarini, a key influence on Basaiti’s style in this early period. As regards subject matter, there are parallels with northern artists such as Holbein the Younger and devotional art similar to Bellini’s Pietà in the Brera Pinacoteca, in that it invites the viewer to contemplate Christ’s body from close up. Some scholars have identified a drawing in the Department of Drawings and Prints in the Uffizi (inv. 156 F), which may have been a preparatory sketch for this work. However, some believe the sketch may refer to Carpaccio’s Lamentation over the Dead Christ (Berlin, Gemäldegalerie, Staatliche Museen zu Berlin). 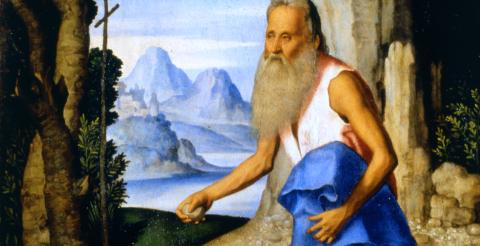