The panel, bequeathed to the Gallerie dell’Accademia by Girolamo Molin in his will in the 1810s, depicts Saint Jerome in the desert striking his breast with a stone while kneeling before a cross. The theme of the penitent saint is typical of paintings destined for domestic devotion, and this work is just such an example, as can also be deduced from its small size and its provenance from a private collection. The popularity of the subject, which was very common in Venice between the late fifteenth and the early sixteenth century, is attested to by the presence in Marco Basaiti’s catalogue of several versions of Saint Jerome, such as the small wood painting held at the Musée des Beaux-Arts in Strasburg and the larger one at the Art Museum in Baltimore. The construction of form through the juxtaposition of shades of colour (with a prevalence of blue and yellowish brown), is characteristic of the artist’s later phase, to which this work tends to be dated, otherwise likened to the manner of the contemporary painter Vincenzo Catena. 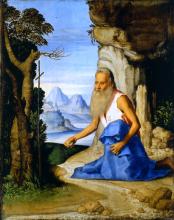 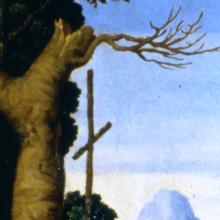 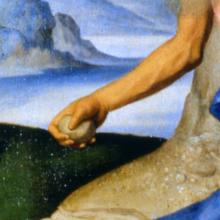 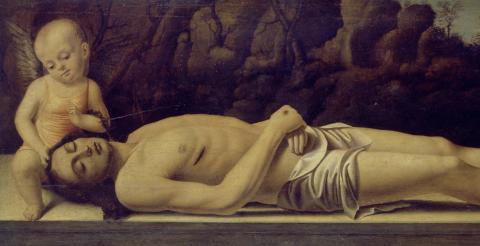