Death of the Virgin

The scene, which is particularly crowded with characters, depicts the Virgin Mary at the moment of her serene “transition” from earthly to celestial life. Carlo Saraceni conceived this theme for the first time in 1606, when he was called upon to replace Caravaggio’s Death of the Virgin (now at the Louvre) for the Roman church of Santa Maria della Scala. The Discalced (or Barefoot) Carmelites who had commissioned Caravaggio refused his work as it did not represent a Transition of the Virgin but was a realistic and extremely earthly portrayal of a dead woman. Even Saraceni, who had become intimately familiar with Caravaggio’s style during his long soujourn in Rome, came across a few problems in elaborating such an unusual theme and painted the altarpiece twice (the first version, known as The Dormition of the Virgin, is now at the Metropolitan Museum in New York, in the Feigen collection). The theological and iconographic theme of the Transition of the Virgin is connected to that of the Dormitio Virginis of the Byzantine tradition, which was well known to a painter such as Saraceni, who was born and educated in Venice. Because of its originality and the complexity of the underlying theological message, Saraceni’s “invention” was extraordinarily successful and was often replicated, especially in reduced form (on brass and canvas) in his workshop. It was even etched and printed by his French student Jean Le Clerc. 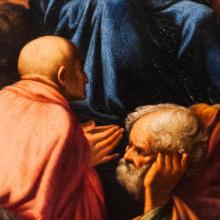 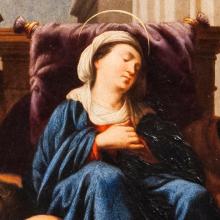 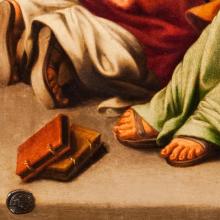 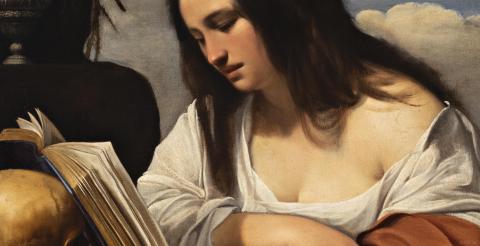