The panel, from the sacristy of the parish church at Legnaro, was probably already in the old church of San Biagio at Legnaro in the fifteenth century. The church was under the jurisdiction of the Benedictines of the Paduan basilica of Santa Giustina, and it is here, perhaps, that we might uncover the link between this small provincial town and the figure of Jacopo Bellini, who maintained a strong relationship with Padua throughout his entire life. The painting is part of the devotional genre of Madonna and Child that gradually substitutes the iconic type while maintaining some of its formal traits, such as its reduced size and the positioning of the two main half-figure subjects in the foreground, but modernising it by innovatively paying attention to the human and emotional aspects of the Virgin and Jesus. From the 1450s, in fact, the artist renewed his style, which had previously been influenced by Gothic stylemes such as those, for example, in his 1448 Madonna and Child in Brera, now constructing forms with a greater sense of solidity and modelling the draped clothing onto the bodies to highlight their volume. The red that dominates the painting is underscored by golden highlights where the light flooding in from the left falls directly. The use of gold, what’s more, harks back once more to the preciosity of Byzantine and Gothic art, but also assumes a new function in constructing mass. The Child’s particularly human gesture as he caresses the Virgin’s face is not typical of Jacopo, and indicates that this might actually be an early influence of his son, Giovanni Bellini. The Child's vivaciousness, what’s more, might well derive from Tuscan models and distinguishes the panel from similar ones that nonetheless adhered more closely to canonical examples such as the Madonna and Child Blessing with Cherubim, which is also at the Gallerie (cat. 582). 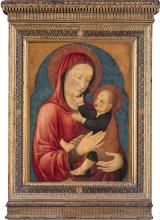 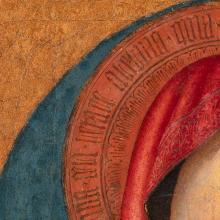 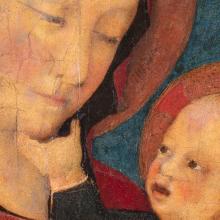 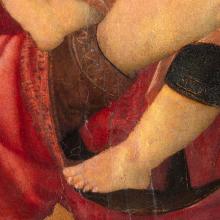 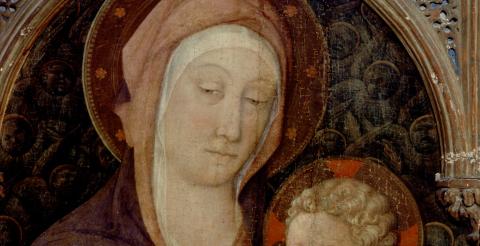 Madonna and Child Blessing with Cherubim