Madonna and Child Blessing with Cherubim

Different ideas have been put forward regarding the original provenance of the panel, which, in the nineteenth century, belonged to the art merchant Giovanni Maria Sasso who had acquired it at the end of the eighteenth century from the abbot Foscarini in Padua. Some scholars maintain it was in the Palazzo Ducale, while others tend towards the Scuola di San Giovanni Battista on Murano, which was the centre of cartographic production and with which Jacopo Bellini was surely in touch. Stylistically dated to the 1450s because of the solidity of the figures and its similarity to works by Mantegna such as the Butler Madonna (ca. 1454, New York, Metropolitan Museum of Art, cat. 32.100.97), the work is an early example of elements that would become distinctive characteristics for Jacopo’s son, Giovanni Bellini: the softness of the traits of the Child and the polygonal parapet that seems to belong to the space of the viewer, thus introducing a sense of functional familiarity to a mode of intimate, personal prayer. The blue cherubim with golden halos that fill the background are the symbol of Divine Wisdom and recall a typically Tuscan motif used by artists such as Michelozzo and Donatello. The closed book in the foreground alludes to the Incarnation of Christ and the new era brought about by his death and resurrection, while the fruit the Child is holding in his left hand references his being the New Adam, who has come to redeem humanity from original sin. The Madonna’s severe composure and her cylindrical form, wrapped in a heavily pleated mantle, however, give the measure of just how different Jacopo’s manner is compared to that of his son Giovanni, who would profoundly modernise this genre and produce masterpieces of insuperable beauty and new pictorial realism. 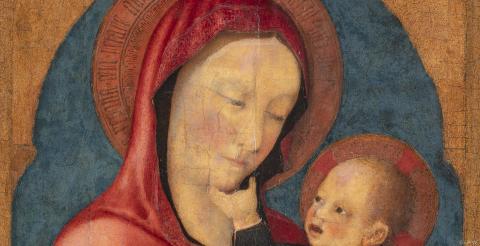