The work was found in the rectory of the Burano Duomo and acquired by the museum collections in 1932. The image is a Hodegetria Virgin (that is, a Virgin who leads by showing the way) in the Dexiokratousa variation in which the Child is held in the crook of the right arm and indicated by the left hand. The background of the panel is painted red, a colour that was commonly used in Venice and the Adriatic as a replacement for more costly gold leaf. The most obvious attribute of the image is its intensely iconic nature, the somatic traits and chiaroscuro defined stereotypically and graphically through the use of essential lines to describe the eyes, eyebrows, nose, and mouth. The originally much larger panel has obviously been cropped on all four sides.

The painting is one of the most representative works of a markedly characterised stylistic whole from a specific workshop, and the Gallerie dell’Accademia piece is probably the oldest of the group which also includes a diptych currently at the Hermitage Museum, a fragmentary reredos formerly at the Kiev Western and Eastern Art Museum, the triptych with Madonna and Child, Saints, and Two Donors at the Split Archaeological Museum, and the Madonna and Child at the Luxembourg Musée d’Histoire et d’Art.

On a number of occasions uncertainty has been expressed regarding whether this modest painter really belonged to the Venetian context, and alternative generalised proposals regarding his belonging to the Dalmatian or Adriatic context have been put forward. The panel, however, can confidently be attributed to the Venetian figurative context, as is clear from the often underlined figurative link with a work of undoubtedly superior quality such as the Madonna allatante, a Madonna suckling the Child, at Saint Mark’s Basilica. 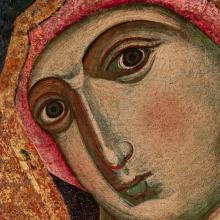 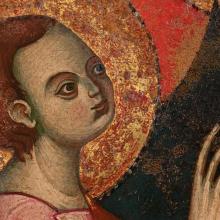