Between the late nineteenth and early twentieth centuries the authorship of this work by Bissolo was brought into question as there was some doubt surrounding the authenticity of the signed inscription. However, it was later confirmed as an autograph painting by Francesco Bissolo.

It is one of several versions of a lost work by Bellini which was copied by many of his so-called followers, as demonstrated by the two examples signed by Bartolomeo Veneto and dated 1502 (formerly in Venice, Donà dalle Rose collection) and 1505 (Bergamo, Accademia Carrara). Bissolo also executed another identical group of the Madonna and Child for a more horizontally developed panel portraying Madonna and Child with the Young Saint John the Baptist, which was sold on the London art market some years ago.

This particular work perfectly encapsulates the artist’s pictorial language showing his preference for softened forms with lyrical overtones, which he achieves through carefully balanced groups, their expressions serene and the figures rendered in muted colours with little stark contrast in the light. A certain Giorgionesque quality to the work has recently been pointed out in the softly uniform flesh-painting and especially in the pastoral and Arcadian landscape which was so typical of Giorgione and which became highly popular at the time thanks to Giulio Campagnola’s engravings and prints. It is precisely these similarities to the Giorgionesque manner that would suggest that the work dates towards the end of the first decade of the sixteenth century, when there was a general move towards the more modern manner in Bellini’s painting (P. Dal Bò, 2014, p. 105) rather than the previously suggested later date of post-1516, after the altarpiece for the church of Santa Maria in Campo on the island of Lastovo in Dalmatia (Paola Carboni, 1986–1987). 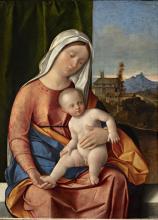 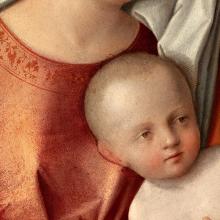 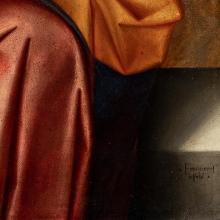 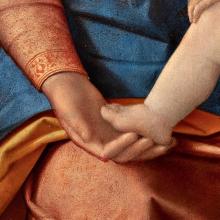