The painting belongs to a typology of the sacra conversazione with a horizontal format and where the Madonna and saints are all in the foreground with a landscape as a backdrop. This was one of the most beloved and popular subjects in sixteenth-century Veneto, favoured above all by private clients.

As they are not framed by an architectural structure, the figures appear to be in natural size. Following the death of Palma, the painting was completed by Titian, as has been confirmed by studies undertaken during recent restoration work. He is thought to have been responsible for Saint Catherine’s head and mantle and the background landscape. Infrared reflectography and radiography analysis have also revealed several changes made by Palma during a first draft of the composition: two male figures beneath Saint John (probably two donors), and the Child’s face turned towards them. The hilly landscape was originally intended to be architectural scenery. 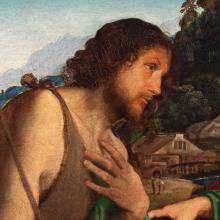 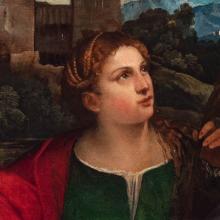