Polyptych of the Apocalypse

The five panels, part of a much larger complex, depict episodes taken from the Book of Revelation, or Apocalypse, traditionally ascribed to Saint John the Evangelist.

The panel of the Vision of Saint John the Evangelist on Patmos is larger than the others and was most certainly the central panel in the original structure, whose woodwork is no longer extant and the disposition of which is unknown to us. The same artefact also contained a further two fragments, as reported by Tatiana Kustodieva (1997): Heavenly Jerusalem and Michael and His Angels Fight the Dragon. These two paintings, held in the Russian State Museum in Saint Petersburg in the early twentieth century, were moved to the Hermitage in 1923. The second of these was then moved in 1954 to the Musuem of the History of Religion, from which it was purloined in 1976 and never again located.

The entire complex was in the church of the Benedictine convent of San Giovanni Evangelista on Torcello, most probably on the main altar, even though the fact that it is never mentioned in older guides might also lead us to conclude that it had already been disassembled years before.

The work was correctly attributed to Jacobello Alberegno by Roberto Longhi (1947), who linked the complex of the Apocalypse to a small triptych signed “Jacobus alberegno pi[n]sit”, depicting the Crucifixion and Saints Ambrose and Jerome, which is also held in the Gallerie dell’Accademia. The painter is still a mysterious and inscrutable figure as studies of his activity are based exclusively on the two works in our museum. The cultural components that make these paintings stand out are clearly Venetian, even though there are also obvious references to the mainland and particularly the neo-Gothicism of Padua and the work of Giusto de Menabuoi.

The existence of another two little panels leads us to exclude that it was a triptych, making it more likely that it was a rectangular reredos whose central panel was the Vision of Saint John flanked by other, smaller episodes, laid out according to the Roman numbering visible on the base and corresponding to the respective chapters of the Apocalypse. These latter scenes, what’s more, precisely retrace Giusto da Menabuoi’s compositional choices for the apse of the Baptistery in Padua. 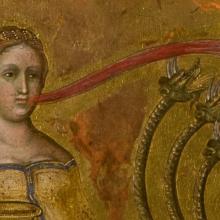 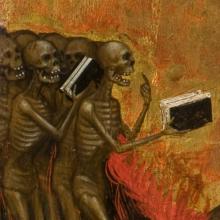 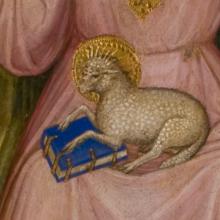 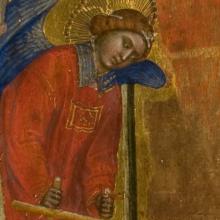 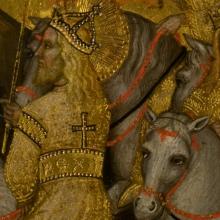 Author: Jacobello Alberegno
morto prima del 1397
Title: Polyptych of the Apocalypse
Catalogue:
1000
Date:
ca. 1390
Technique and material:
Tempera and gold on wood panel
Support:
Wood panel
Provenance:
These panels, state property after the Napoleonic Suppression, were then deposited at San Giovanni Evangelista. Judgment and Vision were sent to Vienna in 1838 and returned in 1919. Reassembled with the other three, they came to the Museum in 1951.
Hall:
Hall I 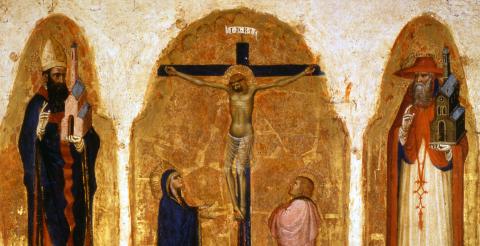