Executed in Venice, the polyptych was commissioned for the cathedral of Conversano (Bari, central Puglia) and was then bought by the state in the 1880s after it had been on the antiques market. Two inscriptions on the central panel of the polyptych date the work to 1475 and connect it to the Murano painter Bartolomeo Vivarini. The panels, placed within a late-Gothic frame, are articulated in three registers: the bottom register, or the predella, depicts Christ blessing and the twelve half-figure Apostles on a gold background; the middle register, whose central scene is a Nativity flanked by full-figure saints, with Francis, Andrew, John the Baptist, and Peter on the left and Paul, Jerome, Dominic, and Theodore on the right; the upper register completes the polyptych with its cymatium depicting the Passion of Christ flanked by two angels. The Nativity scene seems to propose a more robust and plastic composition on the same subject in Vivarini’s 1447 polyptych, now in Prague (Polyptych of the Nativity, Prague, Národní Galerie). The composite style, with qualitative and stylistic differences between the various registers, has led some to hypothesise that the polyptych is a collaboration between the maestro and his workshop. Compared to the figures in the predella and cymatium, the saints in the middle register and the Nativity are presented according to a more coherent plastic and perspectival construction, which echoes the artist’s Paduan training. 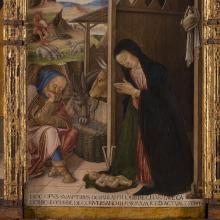 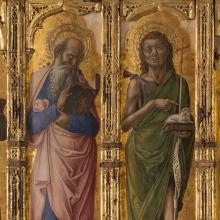