Inspired by eighteenth-century English portraiture, this group portrait depicts the Procurator of Saint Mark Almorò III Alvise Pisani with his wife Paolina Gambara and their children. Almorò III is flanked by his brother Almorò IV Giovanni Francesco, with an allegory of Justice (bearing a bundle of rods and scales of justice) behind them. To the right there are two other men, one of whom is indicating the unmistakable construction of the stables at the large family villa in Strà. The man in black is possibly the abbot Giovanni Gregorietti, in the role of tutor to the children, to whom he is offering a bussolà, a typical Venetian biscuit. 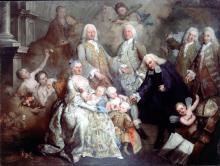 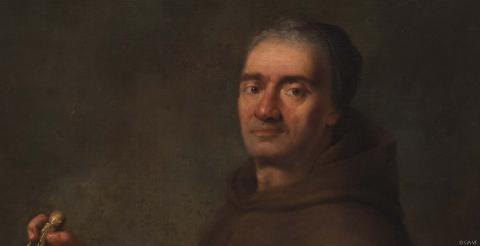