The painting arrived at the Gallerie dell’Accademia along with a conspicuous group of works donated in 1816 by Girolamo Molin to the museum, which was then being constituted. The subject is one of the donor’s forebears, Alvise, who had been portrayed by Tinelli on another occasion (private collection). One of the greatest portraitists of his generation, Tinelli accompanied Molin on his trip to Mantua in 1637, when he was asked to paint the portrait of members of the court of Charles II, Duke of Mantua and Montferrat. It was therefore during his trip to Mantua that, in all likelihood, the painter also executed this three-quarter portrait, as seems to be confirmed by the book on the table bearing the Duke’s seal, which alludes to the “Ducal Commission”, that is Molin’s diplomatic activity on behalf of the Serenissima. Here, the gentleman is surrounded by antique pieces – a probable reference to his passion for collecting – while the large red drape evokes the influence of the portraitist Rubens, who had long resided at the cort of Vincenzo II Gonzaga, Duke of Mantua, but also Tinelli’s awareness of the latest and most eloquent levels of portraiture of Van Dyck, which are an enormous help in dating the portrait to the very last period of the artist’s activity in Venice. 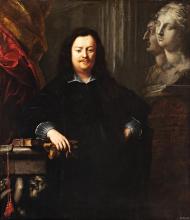 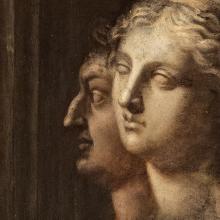 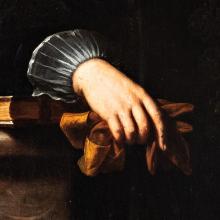 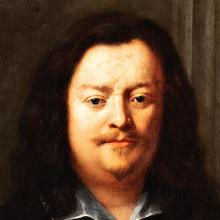