Identified as a work by Lorenzo Lotto in 1923 by Lucio Coletti, who saw it in the official sitting room of a Treviso palazzo belonging to the Rovero counts, it was bought by the state in 1930 from Edoardo Rovero, the last descendent of the Treviso lineage. A famous example of Lotto’s portraiture of the years he spent in Venice (1525–1533), it is generally dated to the very end of the 1520s, just around the time of the 1527 Portrait of Andrea Odoni at Hampton Court and the Portrait of a Woman Inspired by Lucretia at the National Gallery of London. This portrait shares with the latter two its horizontal format (which was decidedly unusual for the portraiture of the time), the relaxed nature of the pose and the naturalness with which the subject is depicted in three-quarter form, the analytical gusto with which the clothes are represented, along with the sense of the material quality of the objects. It is these aspects that differentiate Lotto’s portraiture from that of Titian, along with his cold chromatism and the use of an oblique light.

The young man, dressed in an elegant, elaborate dark suit is shown standing while he leans against a large table viewed side-on and leafs through a large book with a mournful expression. The volume might be a family book recording important events or, more probably, an accounts ledger where income and outcome, debits and credits, are laid out in two columns. In both of these interpretations, however, we have an object that represents the adult life and concrete commitments of the young man portrayed as he manages his family’s affairs. The book is therefore in contrast with the idleness and pleasures of youth, symbolised by the lute and hunting horn in the background. The elements in the foreground are also clearly imbued with symbolic resonance: the rose petals, the ring, the letters, and the woman’s shawl are all allusions, perhaps, to a love that has either come to an end or been hindered. Even the green lizard, in antiquity the symbol of death and rebirth, might refer to the controlling of passions in that it is a cold-blooded animal. 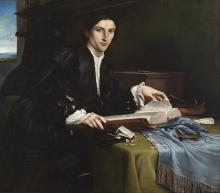 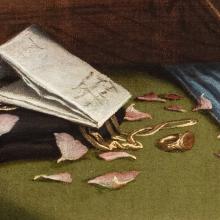 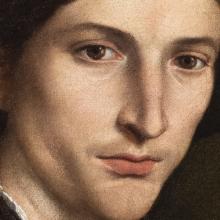