The Presentation of the Ring to the Doge of Venice

This canvas formed part of the decoration of the Sala dell’Albergo in the Scuola Grande di San Marco. Paris Bordon won the commission in a contest in which Lorenzo Lotto and il Pordenone also took part. The painting was removed and sent to Paris in 1797 during the French occupation before returning in 1815 to Venice, where it has hung at the Gallerie dell’Accademia since 1829. The scene shows the final part of a miraculous event that took place in 1341 (see information for Sea Storm, cat. 516). An old fisherman hands the Doge the ring given to him by Saint Mark, who appeared to him during a sea storm (see information for cat. 516). Bordon’s scene is set in a monumental loggia in an architectural setting very reminiscent of the Palazzo Ducale. Bordon’s doge resembles Andrea Gritti, a clear allusion to Gritti’s renovatio urbis, or urban renewal, but also to the maritime renovatio, referring to Venice’s newly acquired dominance as a sea power. Completed in 1534, this telero or large-scale painting shows the influence of Titian and the Tuscan Mannerists who were active in Venice, such as the Florentine architect and sculptor Jacopo Sansovino. 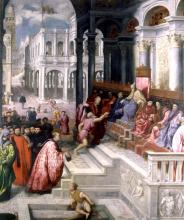 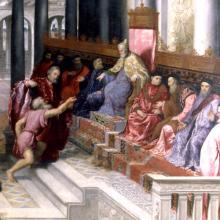 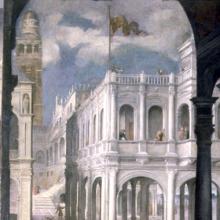