The Self-Portrait by Antonio D’Este was in all likelihood undertaken in the 1810s, according to Pavanello (1990) in about 1812 and Moschini Marconi (1970) in about 1815. This elegant marble bust was donated to the Accademia di Belle Arti in Venice in 1839 by the sculptor’s son Giuseppe, who wanted to keep his father’s memory alive in the very place he had studied. In the nineteenth century, the work was exhibited in the Sala delle Sedute (Selvatico 1859) and was then removed from the exhibition, a fate that would befall almost all the sculptures in the museum from 1895, when Cantalamessa introduced his new layout, and continued throughout the twentieth century.

A specialist in the portrait genre, D’Este is now above all remembered for his biography of Antonio Canova, which was published posthumously in 1864. The Self-Portrait shows how the artist’s production, originally centred on naturalistic modes, now veered towards a more idealising style. The sculptor indulges above all in the description of his hair and the long sideburns that frame his face and its serene, confident expression. 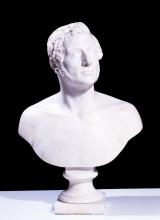