Moschini Marconi hypothesises (1970) that the painting, whose chronology is not documented, can be dated to about the mid-nineteenth century. In 1892, the painting was offered for sale to the Gallerie dell’Accademia by Cristiano Rebeschini, owner of the Bernardoni print shop in Milan, for the sum of 300 lire. The Ministry at first wanted to send the work to the Galleria Nazionale d’Arte Moderna in Rome, but following a suggestion by Camillo Boito, who had been an intermediary during the sale of the piece, it was decided that it would be best to exhibit Zona’s Self-Portrait in the Venetian museum alongside his masterpiece Titian Meets the Young Veronese on Ponte della Paglia.

In this painting, the artist chooses to depict himself in half bust against a neutral backdrop, fixing the viewer with his sharp gaze after giving a three-quarter turn of his bust. The chromatic tone of the piece revolves around very few hues playing on different tones of brown. Our entire attention is drawn to the particularly intense expression that, as Enrico Noè underlines (2005), offers a psychological introspection worthy of the most intimate self-portraits of the old master Hayez. 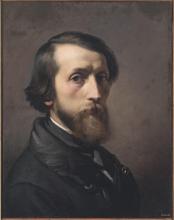 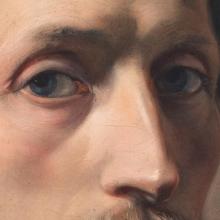 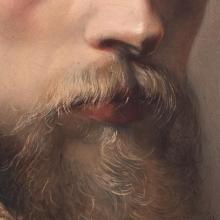