David with the Head of Goliath

This is one of the most typical subjects from Domenico Fetti’s mature period and his David perfectly encapsulates the painter’s fanciful “sprezzatura” or carefully studied nonchalance as well as the mood of poignant melancholy that runs through his work. The young biblical hero is dressed as a modern gentleman, the puffs and frills on his sleeves and stockings and his plumed cap seemingly more suited to a procession or parade than a gruelling fight to the death. There is nothing to suggest the violent battle against the giant Goliath, nor the brutality of his beheading with the heavy sword. Several versions of this painting exist, some with small alterations, housed in museums in Dresden (Gemäldegalerie) and Moscow (Pushkin), with the same dark background with distant echoes of Caravaggio. The work can be dated to 1617–1619, when the artist was still in the service of Ferdinando Gonzaga II in Mantua and therefore before he moved to Venice, which was only in 1622. In Venice, Fetti was a protégé of Giorgio Contarini degli Scrigni, even if the painting as part of the Contarini collection can only be documented from 1766, when it is referred to his main follower, the German artist Johann Liss. 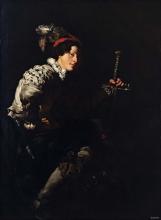 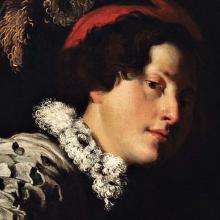 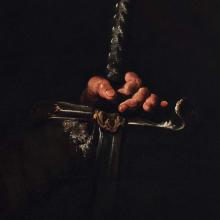 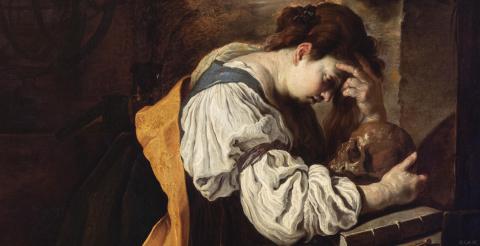