In the half-light of an outdoor setting a woman kneels, deep in thought, her eyes staring at a skull which she holds in her right hand while she rests her forehead on her left, the typical pose of meditation. The beauty and youth of the figure suggest the classic theme of vanitas vanitatum, a reminder of the transitory nature of life and its fleeting earthly pleasures. However, the composition is made more complex by the presence of other significant objects such as the large book lying open on the ground, the painter’s brushes tied up in a white ribbon, an old sculpture, a dog, and an armillary sphere. It is clearly a reference to Albrecht Dürer’s famous engraving of Melancholy, which contains many of the symbols reprised here by Fetti. However, while for the German artist these symbols concern the sphere of humanist learning, in Fetti’s version the prevailing interpretation is Christological and moralistic, namely the abandonment of worldly distractions and focus on prayer. Further confirmation of this message is found in the vine climbing up the crumbling wall, which is intended to symbolise the “true vine”, an allusion to Jesus (John 15:1). The path towards salvation therefore lay in a life of meditation, contemplation, and moderation which would elevate the spirit, as Saint Paul theorised in his Letter to the Corinthians (7, 10). This subject proved highly popular and many copies of it exist, including the version in the Gallerie dell’Accademia, which is one of the higher quality ones (Safarik 1990). It is interesting to note that Guercino saw Fetti’s work during a visit to Mantua in 1618 and faithfully evoked it in his Allegory of Night fresco in the so-called Casino dell’Aurora in the Palazzo Ludovisi in Rome in 1621. 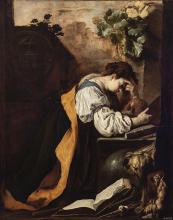 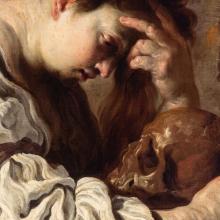 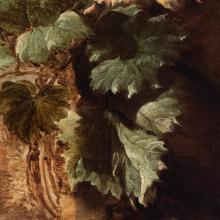 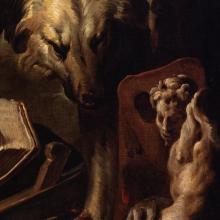 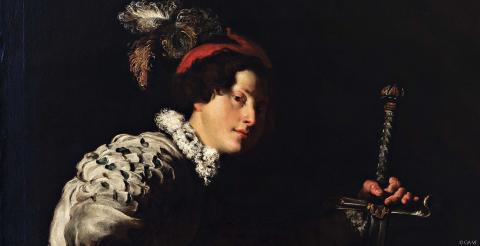 David with the Head of Goliath