The rectangular altarpiece still has its magnificent original frame with alternating dentils, enhanced by a refined chromatic ornamentation in red, blue, and gold.

At the centre of the altarpiece is the monumental figure of the Virgin enthroned, holding in her right hand a large clipeus bearing a depiction of the Child. The Child is engrossed in blessing two little donors, probably husband and wife, who are at their feet and towards whom the Virgin is protectively extending her mantle.

This image is technically extraordinary and dense with meaning. The iconographic model being referenced is the Eastern Platytera Virgin, where, in the original version, the figures of Mother and Child are shown rigorously facing the viewer directly as they are praying. In this case, the theme is blended with that of the Madonna della Misericordia, or Virgin of Mercy, when, albeit only implicitly, her mantle covers the praying faithful. At the same time, it also alludes to the meaning of the Incarnation, foreshadowing the later iconography of the Madonna del Parto, or Madonna of Parturition. The work is perhaps a votive commission, asking the Virgin to intercede in order to favour a pregnancy. Alongside archaic elements such as the rectangular format and the chromatic frame, the figuration and the complex iconographic elaboration itself are clearly much more modern elements. The attribution to Paolo Veneziano, first put forward by Evelyn Sandberg Vavalà, has never been questioned by ensuing scholars and is amply justified by the quality of execution, one of whose salient features is the efficient definition in the portrayal of the young donor. Less simple, however, is the chronological placement of the work, which is in keeping with the overall difficulty in ordering the artist’s entire early production. It would seem plausible, however, to place the work earlier on in his production, towards the 1320s, and thus before the Dormitio Virgini in Vicenza, which has been dated to 1333. 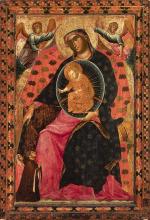 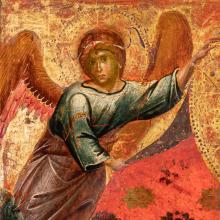 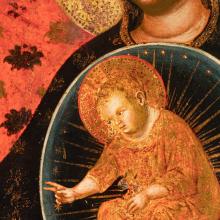 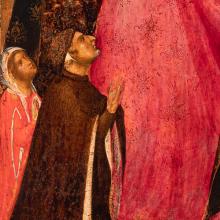 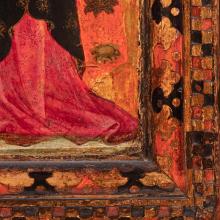 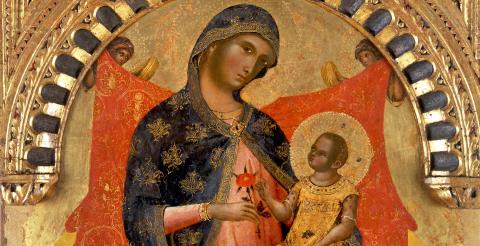 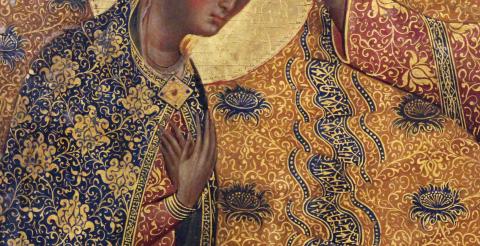 Coronation of the Virgin Polyptych