The polyptych came to the Gallerie with the first group of paintings chosen by Pietro Edwards from those acquired following the Napoleonic Suppression. The iconography of the work clearly refers to the Servite complex of San Giacomo della Giudecca: the central position is held by the standing figure of Saint James the Great, who is recognisable thanks to his usual attributes of the staff and scallop shell, to his side the images of Saint John the Evangelist, Filippo Benizzi (founder of the Servite order, depicted without a halo as he was not canonised until 1671), Saint Michael the Archangel, and Saint Louis of Toulouse.

The polyptych is one of two works signed by Michele Giambono, the other being the beautiful Madonna and Child now held at the Galleria d’arte antica in the Palazzo Barberini, Rome. This piece is therefore of fundamental importance in reconstructing the artist’s body of work, which is otherwise lacking in documentary proof. The five figures present the softening of features, forms, and clothing that distinguishes Giambono’s paintings from the 1440s on, even though they remain faithful to an extremely personal and recognisable style. The arist here masterfully deploys his technical virtuosity, comprised of refined chromatic juxtapositions and a magisterial precision in the material definition of the painterly surface. The insistent search for precious effects designed to confer on the object, including its engraved frame, the aspect of sumptuous goldsmithing can be seen in Saint Louis’s cape, which faithfully reproduces a silk fabric with touches of light rendered by shell gold. The original “metallic” quality the armour of Saint Michael the Archangel must have had, however, has in part been lost.

In the past, the work has been linked to a sheet held in the collections of the Albertina museum in Vienna which shows, on the front, a figure of Saint Michael the Archangel and a saint holding a book and, on the back, an image of Saint Christopher. 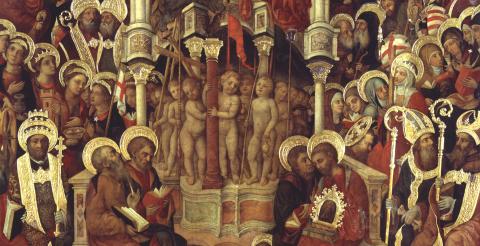 Coronation of the Virgin in Heaven