Portrait of the Engraver Francesco Bartolozzi

The painting, undertaken in London and exhibited at the Royal Academy in 1794, was donated by the artist to Venice’s Accademia di Belle Arti in 1834. Pellegrini wanted to leave the work to the Florence Accademia as a homage to the city of birth of his protector Francesco Bartolozzi, but Bartolomeo Gamba, the Bassano publisher, convinced him to donate the work to the Venetian institution, of which he was a member.

The painting depicts the Florentine engraver Francesco Bartolozzi (1728–1815), who was famous in Venice, where he had arrived in 1748, and moved to London in 1764 at the behest of Richard Dalton, librarian and counselor to George III. He was one of the founders of the Royal Academy and promoted Pellegrini’s soujourn in London.

The portrait, devoid of rhetorical excess, shows Bartolozzi busy at his engraving, which is presented as an eminently intellectual and not merely manual pursuit. The sensitivity of colour and light, which betray the painter’s Veneto origins, is enriched by the typical novelties in late-eighteenth-century international portraiture, which Pellegrini picked up in Rome, where he frequented Antonio Canova and Angelica Kauffmann, and later in London. 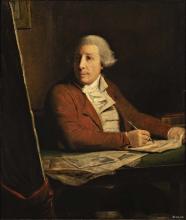 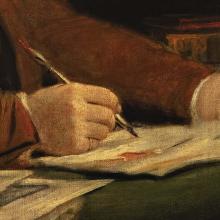 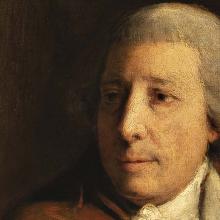