Acquired by the museum in 1911 as “head of a man”, this vivid oil on wood panel by Tranquillo Cremona was only identified as a portrait of Ludovico Lipparini in 1933, following a suggestion by Giorgio Nicodemi. Between 1854 and 1856, the year of Lipparini’s death, the painter from Pavia was his student at the Accademia di Belle Arti in Venice. Nicodemi maintains that the portrait should be dated to 1858, that is two years after Lipparini’s death.

Recently, Enrico Noè (2005) questioned the identification of the portrait as there seemed to be no physiological correspondence between the painting and the two busts of Lipparini by Rinaldo Rinaldi and Antonio dal Zotto. According to Noè, in fact, if this really were a portrait of the painter, then the portrait itself would be testament to Cremona’s extreme creative freedom, which would be completely devoid of any intent to characterise the painter’s physical aspect while concentrating on his interior state. The artist captures the flash of a furtive expression that animates the face of the subject, engrossed in some thought that pushes his gaze elsewhere. The work’s swift brushstrokes emphasise a vibrant chromatic iridescence and present an interesting study of the possibilities of light. 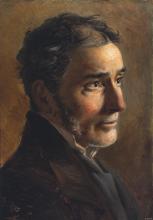 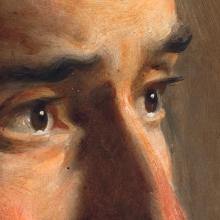