Portrait of a Painter

The painting entered the Gellerie collections in 1896 as a self-portrait of Giambattista Piazzetta, and its attribution was changed in 1924 when Fiocco assigned it to Luigi Crespi. In 1943, Arslan finally assigned it to Federico Bencovich, and the attribution was confirmed by Moschini Marconi (1970) due to “its peculiar, cold chromatic inflexions and examples of iridescence”. Only one year later, in 1971, Pallucchini once again called into question Bencovich’s autograph on the basis of a comparison with another self-portrait by the artist, but this negative opinion did not prevent Peter Oluf Krückmann (1988) from including the painting in his monograph on the Dalmatian painter.

This extremely refined work can be dated to the 1730s and portrays a painter dressed in the extravagant style of the period, his silk clothes with golden inserts catching and reflecting the light in the reverberation of a warm light coming in from the left. Portrayed as he holds his tools of the trade, the subject seems to have suddenly turned towards the viewer, and with a gesture of his right hand he is inviting us to observe his books, which include treatises by Dürer and Leonardo as well as Ovid’s Metamorphoses, collected among fragments of sculptures used to study human anatomy. 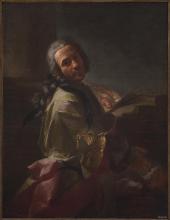 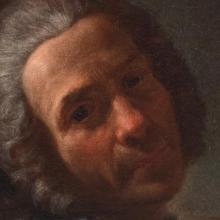 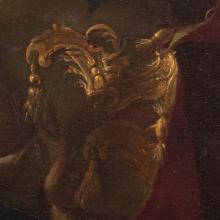 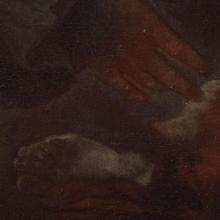 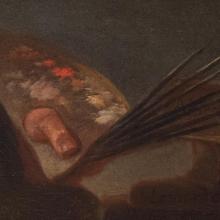