This is the last of the confirmed self-portraits by Luigi Crespi, the painter son of the more famous painter Giuseppe Maria Crespi, undertaken to celebrate his appointment as honorary member of the Accademia di Belle Arti in Venice in 1776. Two years later, the painting was sent to the Accademia as a pièce de réception. Initally held in the old Accademia premises situated on the Fonteghetto della Farina, it was consigned to Pietro Edwards in 1807 and placed in the Accademia collections.

The inscription, placed on the easel of the painting behind the painter, contains signature and date of execution, which are nonetheless not easily readable and have thus been interpreted variously by different scholars. Crespi portrays himself in three-quarter pose in his own studio, with his tools of the trade in one hand while with his other he is leafing through the third volume of the Felsina pittrice, his most important publication. The artist chooses to depict himself in the double guise of writer and painter, with the precise aim of communicating his social status, which can also be evinced from the highly realistic sumptuous clothes he is wearing. 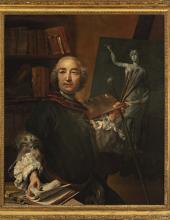 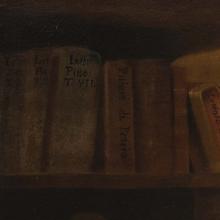 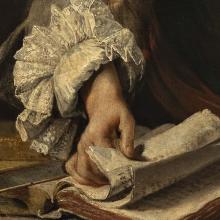 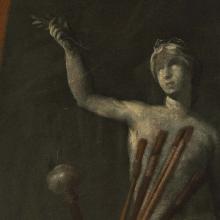