The panel was bought by the Italian state in 1959, after having been ceded to the repositories of the parish of San Giorgio delle Pertiche in 1846 by an anonymous owner. It is unknown where the painting was originally hung, even though it would seem plausible, considering an inscription on the back and dated 1711, that it was a small devotional panel placed in a public building. The painting, dated to around 1441, adds to the series of Madonnas executed by Antonio Vivarini between 1440 and 1450, and which were midway between the Byzantine influence and new stylistic trends from central Italy, and in particular those from Florence in the first half of the fifteenth century. This panel shares many stylistic elements with the polyptychs now in Porec (Museum of the Euphrasian Basilica) and Vienna (Kunsthistorisches Museum), even though in this case the Virgin is not depicted in the usual front-on manner, but in a slightly three-quarter pose as she delicately bends her head forward while holding the blessing Child. The gold background, which was considerably retouched during an eighteenth-century restoration, confers an unreal atmosphere on the painting, which betrays, in the volumetric rendering of the figures, a modern spatial conception and brings the work closer to the important innovations of the Tusscan language of Masolino and Filippo Lippi. There are also novel elements in the plastic volumes of the faces and the positioning of arms and legs, as well as in the psychological honing of the characters, which was also derived from a familiarity with the contemporary works of Jacopo Bellini. 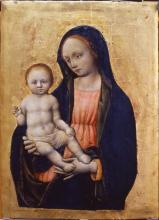 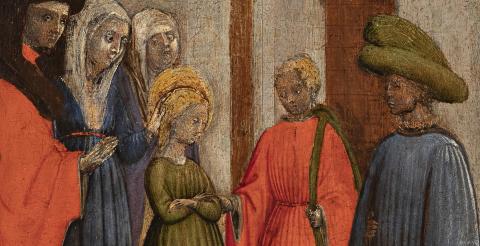