This is the first of the small panels identified by Pietro Paoletti in 1903 as part of the “little histories” of the Santa Monica altarpiece, formerly in the church of Santo Stefano in Venice and then lost in the eighteenth-century antiques market, but once listed in Sansovino’s and Ridolfi’s guides. For the same church, the artists executed the Saint Jerome Polyptych (now at the Kunsthistorisches Museum, Vienna) in 1441, a date that is felt to be appropriate for the Stories of Santa Monica. The series has so far been recomposed into five episodes: the Birth of Saint Augustine (London, Courtauld Institute of Art) and Conversion of Patricius (Detroit, Institute of Art) identified by Longhi (1926 and 1929–1930), and Saint Ambrose Baptising Saint Augustine (Bergamo, Accademia Carrara) and Saint Monica in Prayer with the Young Saint Augustine (La Spezia, Museo Civico Amedeo Lia), which were added to the series by Zeri and Toesca (1951). The small panel at the Gallerie dell’Accademia depicts the marriage of Saint Monica with her parents, as is indicated in the Gothic-lettered script in the lower section (THIS IS HOW SAINT MONICA WAS SENT TO BE MARRIED BY HER FATHER AND MOTHER). The architectural backdrop and the careful spatial organisation are testament to a new sensitivity, derived indubitably from the art of Masolino, whom Vivarini most probably met when he passed through Venice during his trip to Hungary from 1425 to 1427–1428. 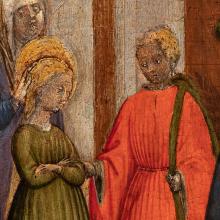 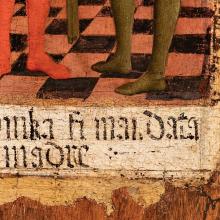 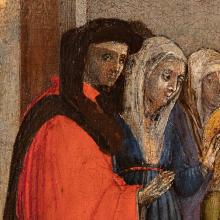 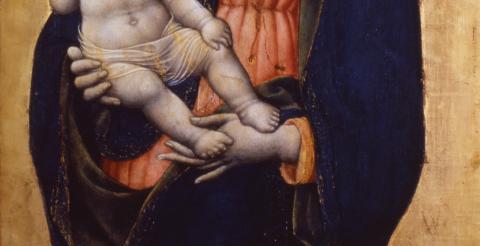